DHARAMSHALA, India -- Police in the north Indian state of Himachal Pradesh, exile home to thousands of Tibetans including His Holiness the Dalai Lama and the Central Tibetan Administration, have been alerted of possible terror strikes on Buddhist population and monastries. 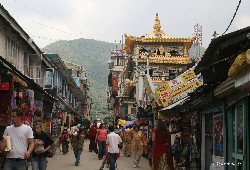 NIA reportedly sent a communiqué to the state police on Monday evening, cautioning them about the possible terror strike on Buddhist monasteries in Himachal Pradesh. The plans to strike the monasteries are believed to have been revealed by an operative of the Indian Mujahideen in Hubli after the module was busted recently following the serial bomb blasts in Gaya earlier this month.

On the morning of July 7, a total of ten bombs exploded within the complex of the two millennia old Mahabodhi Temple and at other locations, including the Tergar Monastery, the seat of the Gyalwang Karmapa in Bodhgaya,

Responding to the communiqué, the Crime Investigation Department’s Additional Director General of Police Sita Ram Mardi confirmed that the state police has sent an alert to all district police chiefs and directed them to tighten security in Buddhist-populated areas.

Dharamshala, located in Himachal Pradesh, is the exile residence of Tibetan spiritual leader and Nobel Peace Laureate, the Dalai Lama and the 17th Gyalwang Karmapa. The exile Tibetan administration, headed by its democratically elected leaders, is also based in the hill town.

Himachal Pradesh is home to more than a dozen Tibetan refugee settlements and several Buddhist monasteries, including the Tsug-la Khang, which is situated in close proximity to the Dalai Lama’s residence and the Gyotu Trantic Monastery, the residence of Gyalwang Karmapa.

According to reports, the state CID has also sent a communiqué to the Home Department, pushing for a total revamp of the security of the Dalai Lama and the installation of explosive detectors at his residence.

Following the terror attacks in Bodhgaya, the Tibetan Parliament-in-Exile had written letters to the Indian Prime Minister and Chief Minister of Bihar and Himachal Pradesh, urging for a “heightened level of protection” to ensure the personal safety of the Dalai Lama and Gyalwang Karmapa.

The Tibetan lawmakers apprised the central and state governments on the need for greater security at Buddhist places of worship while urging heads and leaders of the major lineages of Buddhism and their monasteries to pay close attention to the security aspects of their respective places.