New Delhi, India -- A Buddhist lama says a new confederation will seek to bridge the gap between the world's Buddhists and be a voice for the religion at major international events. 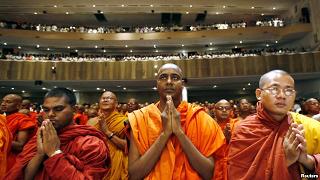 << Buddhist monks pray during the inaugural ceremony of the International Conference on World Peace and Buddhism in Mumbai, India. (file photo).

In an interview with VOA Wednesday, Lama Lobzang said it was the first time in history that a consensus has been reached among the worldwide Buddhist entities to form a unified body to represent their faith.

"The main responsibility of our organization is the preservation of Buddhist heritage sites including over 100 Buddhist meditative caves in Indian states such as Gujarat, Maharashtra, and Madhya Pradesh. These ancient Buddhist sites that were previously neglected need to be protected and preserved."

Earlier this month, Buddhists from 33 countries attended the first International Buddhist Conference in New Delhi and formally launched their umbrella organization, which will arrange pilgrimages to ancient Buddhist sites in India.

"We have noticed the lack of Chinese participants in this congregation due to the refusal of the Chinese government to grant them passports. Majority of the people we invited were refused exit permits to leave the country. Despite our efforts to invite professors from Beijing University, and their willingness to participate in the congregation, the government of China has made it impossible for them to attend the congregation."

The organization will be run by the Ashoka Mission, a Buddhist non-governmental organization based in New Delhi.