Ladakh, India -- His Holiness the Dalai Lama unexpectedly visited Basgo Nunnery in Ladakh, one of the homes for destitute children funded and built by the Lotus Flower Trust, a charity based in Hyde in the New Forest. This was an amazing, once in a lifetime opportunity for all the orphaned nuns at the home - to hear his teachings and be inspired by his much revered Buddhist wisdom. 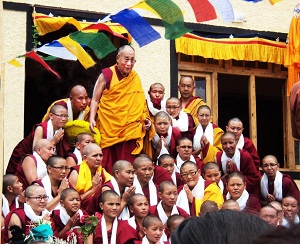 << His Holiness the Dalai Lama at Basgo Nunnery in Ladakh, the nuns and nunnery itself funded by Winchester College in partnership with the Lotus Flower Trust.

The Dalai Lama has been travelling through Ladakh, in the very north of India, where the Trust has built many homes and schools, in honour of the Buddhist Kala Chakra festival. During this special time His Holiness holds Buddhist seminars across the country to which everyone attends. It is a huge event so the Ladakhi people have been busy repairing roads and preparing for his much anticipated honoured presence. John Hunt, CEO and founder of the Trust, said: “This will have been the happiest day of the nuns’ lives and is wonderful news for the Lotus Flower Trust and of course Winchester College who funded and worked on the construction of the nunnery.”

The Dalai Lama’s visit to Basgo went very well, it has been reported. Villagers came to the nunnery along with some foreign visitors who were also there to witness the ceremony. His Holiness stayed inside for 30 minutes to bless the nunnery and address the nuns and local public.

All the visitors were served with butter tea, cold drinks and Daysil (sweet rice) by the nuns. “It was a very successful event. We all had a very special time in the presence of His Holiness,” said Dorje, one of the soon to be resident nuns.

By definition, Buddhist nuns in Ladakh are beggars. Whilst Basgo is a nunnery, it is most importantly a home for children from very poor families who cannot afford to bring up all of their offspring. The Ladakhi people face many challenges, not least the environment, prone to earthquakes and avalanches, as well as enduring extreme weather conditions. The nuns provide destitute children with a good education; when they are 18 they can choose to stay as nuns or revert to normal life.

They also offer lessons in basic Buddhism, yoga and meditation to tourists. In addition the nunnery will serve as a refuge for Ladakhi women who have suffered abuse.

Over the past two years, two separate teams of young men and Dons from Winchester College have been fundraising to pay for the construction of this home and nunnery for 60 destitute nuns, ranging from seven to 32 years. The teams have collectively raised £69,000 and have worked hard on the building site with the Nepali builders and nuns themselves. The buildings are very nearly complete with the exception of the Temple which needs a further £16,000-£20,000 in order to begin building.

The inauguration of Basgo Nunnery will be held on the 4th August. Only after this event will the nuns take up residence here (at the moment they are living at Saboo Ayu 30 miles away). There is an enormous guest list - it will be a huge event!

As well as building homes and schools for destitute children, the Lotus Flower Trust helps many individuals, schools and businesses to experience life-altering trips. To find out more about the charity’s work, get involved or to offer financial support, visit www.lotusflowertrust.org.