Prayers offered for long life of the spiritual leader

Dharamsala, India -- The Dalai Lama today thanked four Tibetan organisations for organising a grand prayer ceremony for his long life at the main temple in Dharamsala. He said he was in very good health and would be able to live over 100 years. 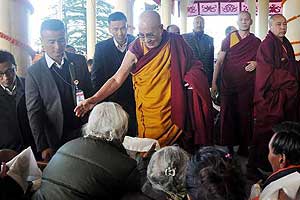 << The Dalai Lama greets devotees at the Tsuglagkhang temple in McLeodganj near Dharamsala on Wednesday. Photo: Kamaljeet

Addressing the ceremony, the Dalai Lama thanked them for their unwavering faith and spiritual bond.

“The long-life prayer ceremony is rooted in a strong spiritual bond between the teacher and his disciples. The best way for the disciples to fulfil the wishes of the teacher is to engage in meritorious activities. However, one should examine whether what the teacher is preaching is reasonable or not, and act accordingly,” the Dalai Lama said.

“As we are known in the world for our warm-heartedness and morality, Tibetans must uphold these values. These values not only help you in leading a meaningful life, but also for the flourishing of the Buddha’s teachings,” he said.

The Dalai Lama recounted how he was offered long-life prayers by different monasteries in Tibet to ward off obstacles on reaching the age of 13 and how long-life prayers could not be arranged when he reached 25 as he had to flee the Chinese invasion of Tibet.

“Now you have offered the long-life prayers on the occasion of my 80th birthday. Apart from a minor knee problem, I am in a very good health and will be able to live over 100 years,” he said.

“Most importantly, every Tibetan should take the responsibility and work for the cause of Tibet with dedication and sincerity in this life time. There should not be a feeling of regret when one passes away,” he said.

The dignitaries of the Central Tibetan Administration, including members of the Kashag, Speaker, Deputy Speaker and members of the Tibetan Parliament, and justice commissioners attended the ceremony.