Amaravati all set to be Mahayana Buddhist centre

AP planning to attract tourists from China, Japan and Thailand

Andhra Pradesh, India -- The ancient town of Amaravati, which forms part of the upcoming capital region of the State, will be promoted as a cradle of Mahayana Buddhism to attract international tourists, particularly those from China, Japan, Thailand and other Asian countries. 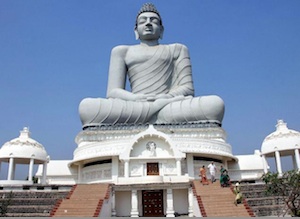 Acharya Nagarjuna, known as the second Buddha, was the founder of Madhyamika school of Mahayana Buddhism, one of the two main branches of Buddhism. With the Urban Development Ministry already declaring the ancient Amaravati as one of the 12 Heritage Cities in the country under HRIDAY scheme, the Andhra Pradesh government is focussing on developing a major Mahayana Buddhist tourism circuit encompassing Amaravati and Nagarjuna Konda.
Generally tourists visiting Buddhist circuit go to Bodh Gaya, Sarnath, Lumbini and Kushi Nagar.

“We want to market Amaravati and Nagarjuna Konda as part of the Buddhist circuit,” a top official told The Hindu .

The official said the State government was planning to establish an exclusive stall in Bodh Gaya to disseminate information on the importance of Amaravati, Nagarjuna Konda and other Buddhist sites in Andhra Pradesh. He said Buddhist-related festivals were being organised every year between October and March at Bodh Gaya where Buddhist Monasteries from different countries have been established. “We also want to tie-up with those monasteries,” the official said and setting up of Monasteries Boulevard in the new capital region was a major step in this direction.

Various projects have been planned to develop ancient Amaravati town under HRIDAY scheme and also under PRASAD scheme of the Union Ministry of Tourism by spending about Rs. 90 crore.
TOP