New Delhi, india -- India has a new top cultural diplomat - and he is called the Buddha. 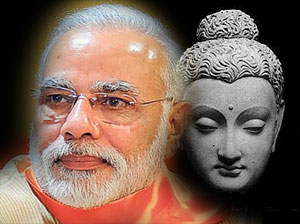 The Narendra Modi government has decided to make India's Buddhism links the centrepiece of its cultural diplomacy thrust through a blitzkrieg of novel projects, after the Prime Minister feted East Asian leaders through his first year in office with references to this religious bridge.

The Indian Council for Cultural Relations, the foreign office's independent arm tasked with cultural diplomacy, plans to host 26 seminars on the country's Buddhist past across multiple countries by next March with scholars, monks and policy-makers as its target audience.

The unprecedented push on Buddhism is led by the ICCR's president appointed by Modi, Lokesh Chandra, one of India's foremost scholars on the religion, and is aimed at adding heft to a focus the Prime Minister has hinted at through more symbolic gestures.

But experts have also warned that any meaningful and long-lasting success in using Buddhism as a cultural diplomacy tool will require the government to also focus on promoting and protecting Buddhist sites in India, and encouraging research within the country.

"It's about time we invest in tapping into Buddhism as a key arm of our cultural diplomacy," Chandra, the ICCR president, told The Telegraph at the agency's headquarters here. "There's incredible potential and interest overseas - we need to capitalise on that."

Fudan University in Shanghai will host, in September, a conference on India-China Buddhist links, the first such meet of its kind, Chandra said. In Ladakh, the ICCR will host a "festival" where scholars and representatives from China, Mongolia and South Korea will be invited.

The ICCR has also got on board India's premier science research institutions. The Indian Institute of Science (IISc) will host a conference on philosophical similarities between Buddhist thought and quantum mechanics in November.

The abbot of the prestigious Shaolin monastery in China's Henan province will visit India to attend a conference on Zen Buddhism, and speak to scholars. He will then visit Kanchipuram, the birthplace of Theravada Buddhism, a strand that then spread from there to Myanmar and Thailand.

India had also invited Japanese Prime Minister Shinzo Abe to attend one of the conferences the ICCR will host in India, but he is instead expected to depute a cabinet minister, officials said.

In New Delhi, the ICCR will host an exhibition of Chinese Buddhist paintings, while the Modi government will hold a conference on the concept of non-acquisitiveness known as aparigraha that Buddhism shares with Hinduism and Jainism. And the ICCR will offer travel grants to Chinese monks to visit Indian monasteries.

But these conferences and seminars may yield only limited results if the Modi government does not also invest in deeper domestic research in Buddhism with a long-term vision, said Daya Thussu, professor of international communication at the University of Westminster in the UK, and the author of a 2013 book, Communicating India's Soft Power: Buddha to Bollywood.

"It is not enough to merely highlight the cultural and religious bonds by convening international conferences, where bureaucrats and their chosen friends in the academia periodically meet and talk about the past," Thussu said in an email interview. "A roadmap for future activities is necessary."

These "activities", Thussu said, could include investing in protecting and promoting Buddhist sites, encouraging study of Buddhist art, philosophy and literature in Indian universities and providing internationally acceptable infrastructure for faith-based tourism and scholarship.

The decision by the ICCR, which has traditionally focused on mainstream dance and cultural forms and on their exhibitions overseas, to place such a thrust on Buddhism follows a series of symbolic gestures by Modi over the past year.

Like many elements of Modi's foreign policy, the focus on Buddhism as a diplomatic tool began under his predecessor Manmohan Singh, with the project to recreate the Nalanda University in Bihar.

But Modi took up that legacy early - and with a zeal beyond anything Singh offered, experts said.

He made Buddhist Bhutan his first foreign visit as Prime Minister, and in August last year, travelled to two major Buddhist shrines in Kyoto during a trip to Japan. In September, visiting Chinese President Xi Jinping was greeted in Ahmedabad with an exhibition on ancient Buddhist links between China and Gujarat - including a visit by the 7th-century traveller-monk Xuanzang.

The same month, the Modi government also began a series of symbolic gifts - saplings of the original Bodhi tree in Gaya - to East Asian nations. President Pranab Mukherjee carried a sapling to Vietnam in September.

In November, Modi took a sapling to Nepal. The Prime Minister also carried the saplings as gifts during his visits to China, Mongolia and South Korea in May.

But there's a lot more Modi and his team need to do, argued Thussu.

"Indian bureaucrats and Mr Modi's cultural diplomacy advisers should pay visits to Chinese Buddhist sites and museums to see how they look after their cultural heritage, despite being a 'godless' nation," Thussu said. "India needs a more activist cultural diplomacy - drawing on its enormous democratic and diasporic constituency."