DHARMSALA, India -- The exiled Tibetan government says there is no cause for celebrating 50 years since China formed the Tibetan Autonomous Region, and insists Tuesday instead marks a half-century of occupation and control over the once-independent Himalayan nation. 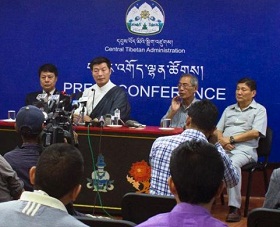 << Lobsang Sangay, the prime minister of the Tibetan government-in-exile, seated second left, speaks to media personnel in Dharmsala, India, Tuesday, Sept. 1, 2015. The exiled Tibetan government said it saw no cause for celebrating 50 years since China formed the Tibetan Autonomous Region, insisting that Tuesday instead marked a half-century of occupation and control over the once-independent Himalayan kingdom. (AP Photo/Ashwini Bhatia) (The Associated Press)

The Tibetan government-in-exile issued the statement as China was reveling in lavish celebrations marking the 70th anniversary of Japan's World War II defeat. Earlier this year, China released a military strategy statement again declaring Tibet has been an integral part of China since antiquity.

The exiled Tibetans denied the claim, and also warned China against its plans to choose the next Dalai Lama from inside China, home to some 5.4 million Tibetans, when the present spiritual leader dies. Tibetan Buddhists believe the Dalai Lama himself choses his own successor through reincarnation.