The Buddhist voter in Bihar: Their election issue is if they get to run their

Priyapal Bante, a monk of the Chakma tribe and settled in Bodh Gaya, said they are waiting for a Supreme Court verdict. “We expect justice will be done. If not, we will go to the UN,” he said.

Bodh Gaya, India -- Away from the caste, vikas and dal debates, a small community voted last week with a demand of its own — one they say no one in Patna or Delhi listens to. Bihar’s Buddhists want the management of one of their holiest temples, Maha Bodhi , restored to Buddhists. 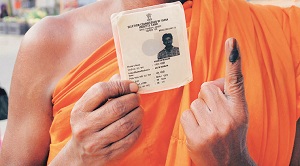 “There are more than 2,000 registered Buddhist voters here. Their only concern is to see an amendment to the unfair Act of 1949,” Kali Prasad Bodhi, a retired Air Force official, said of the Bodh Gaya Temple Act, 1949, which provides for an eight-member managing committee for the Bodh Gaya temple with four Hindus including the mahant of the local temple, four Buddhists, and the Gaya district magistrate as ex officio chairman.

“No party talks about our issue because we are so small in number.” He said that besides 2,000 in Bodh Gaya, several thousand other Buddhists live in Bihar.

Until a recent amendment, Bodhi said, the DM could head the body only if he was a Hindu. “And currently, only one Buddhist member is active in the Bodh Gaya Temple Management Committee. It is the biggest fraud against us. This is one of our holiest places and we aren’t allowed to run it.”

Pragreya Ratan, whose name used to be Ramesh Manjhi before he converted to Buddhism in 1999, says the committee has to be reconstituted every three years but hasn’t been for nine years. “Maha Bodhi Maha Vihar isn’t anybody’s property. It is a Buddhist shrine and Buddhists must run it. There will only be Hindus running a temple; Masjid committees comprise Muslims only.”

Bodhi said they have been petitioning politicians regularly. “During this election too, nobody was ready to take this up,’’ he said. “Whichever party comes to power in Patna appoints its people as members in the committee. We have no voice.”

The candidates in Bodh Gaya were not willing to speak on this.

Priyapal Bante, a monk of the Chakma tribe and settled in Bodh Gaya, said they are waiting for a Supreme Court verdict. “We expect justice will be done. If not, we will go to the UN,” he said.

Bhu Tsering, a former Army man, said, “This is an international destination for thousands every year but an open nullah runs here. It stinks all the time.’’

Pragya Deep Bante of All India Bhiku Sangha Bodhi said he has been fighting the battle for “liberation of the temple” for 28 years. “Wherever PM Narendra Modi goes, he talks about Bodh Gaya and gifts Buddha statues to foreign dignitaries,’’ he said. “Here, he didn’t even listen to our demand. He spoke as if Hinduism and Buddhism were one religion.”

Bodhi said 10,000 Buddhists who are Indian citizens live around Gaya. “We do tell people to vote but we don’t suggest any party. That is their choice,’’ he said.

Buddhists are now waiting for a new government to take charge next month so that they can petition it again. “It is unlikely that the candidate who wins Bodh Gaya would support our demand,” said Kali Prasad Bodhi. “All of them want status quo.”