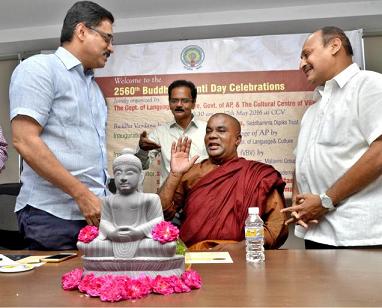 Ven. Dhammadhaja was addressing the gathering at the inauguration of Vijayawada Buddha Vihar as part of week-long celebrations of the 2,560thBuddha Jayanti, which falls on May 21, jointly organised by the Department of Language and Culture of State and Cultural Centre of Vijayawada (CCV).

Founder of CCV and chairman of Malaxmi group Y. Harish Chandra Prasad inaugurated the exhibition of Buddhist Heritage of AP and also launched the Buddha Vihar which will be headed by Golla Narayana Rao.

Ven. Dhammadhaja said that the government is just looking for money but a large number of people are affected due to alcohol in the State. “AP needs ban of alcohol and it will bring lot of changes in society. We will raise this issue with the Chief Minister. Practising meditation is need of the hour to revive well-being among the citizens,” Ven. Dhammadhaja added.

“Man has developed only through materialistic prosperity and no human values,” he said.

Mr. Harish Chandra Prasad called upon people to observe Buddhism for a week. “Andhra Pradesh was totally influenced by Buddhism. If we can adopt that again we will be able to conquer anti-social elements and issues in our society”, he said

Mr. Harish Chandra Prasad announced that CCV would be digitising the Buddhist Heritage and relics across the State as part of the Digital India initiative.