Varanasi, India -- The International Buddhist Conclave-2016 aimed to showcase Buddhist heritage and pilgrimage sites in the country, opened its sessions in Sarnath today, the heartland of Buddhist pilgrimage. 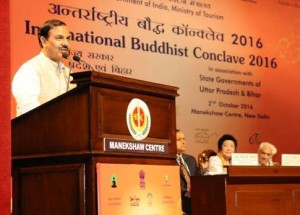 "Sarnath will be made the hub of Buddhist tourism in India and efforts will be made to bring in air, rail and road connections from Sarnath to various Buddhist sites in India," he said.

He said for an amount of Rs 132.17 crore have been sanctioned by Tourism Ministry till date for development of Buddhist circuit in India under its 'Swadesh Darshan Scheme'.

He also said that for Uttar Pradesh, the Ministry of Tourism is in the verge of sanctioning an amount of Rs 99.97 crore this year for infrastructure development of Buddhist circuit covering Saravasti, Kapilvastu and Kushinagar.

Welcoming the delegates and participants, Tourism Secretary Vinod Zutshi said, this is the first time the International Buddhist Conclave is organised in Sarnath.

He said India is prepared for developing a trans-border Buddhist Circuit across ASEAN and SAARC countries to enhance movement of Buddhist pilgrims in the region from remaining parts of the world.

The whole day session included panel discussions on 'India -- The Land of Buddha' with an objective to showcase India as Buddhist destination and "Creating Buddhayana Sangha" for the worldwide community of Buddhists.

More than 240 international delegates from 39 countries are attending the conclave this year. The delegates will also travel to Nalanda, Rajgir and Bodhgaya to experience the Buddhist heritage in Bihar.

With a view to showcase and project the Buddhist heritage and pilgrim sites of India, Tourism Ministry is organising the '5th International Buddhist Conclave' from October 2 to 6 in association with state governments of Uttar Pradesh and Bihar.
TOP