Mumbai, India -- On his tour to India during 1931-38, for regenerating Buddhism, Fujii Guruji met Mahatma Gandhi and actively participated in the freedom movement of India. 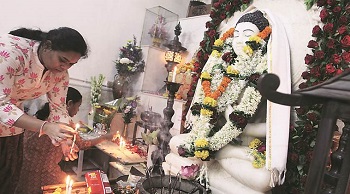 << The temple was constructed not only to spread the message of Buddhism but also to improve trade relations between India and Japan. (Express archive)

The noise of busy streets and heavy traffic fades into the background as soon as you enter ‘Nipponzan Myohoji’ — a Japanese Buddhist temple founded by Nichidatsu Fujii Guruji. Except for a man sweeping the floor, you find yourself surrounded by a peaceful silence within the sanctuary of the temple.

As you enter, newspaper cuttings about the temple and Bikshu T Morita, the resident Japanese monk who has been taking care of the temple since 1976, are seen on the entrance wall. On either side of the centre of the temple, which is adorned by various statues of Buddha, are portraits of the family who funded the construction of the temple.

On his tour to India during 1931-38, for regenerating Buddhism, Fujii Guruji met Mahatma Gandhi and actively participated in the freedom movement of India. As a token of his service towards Indians, Jugal Kishore Birla, a philanthropist, built this temple funded by Raja Baldeo Das Birla and officially opened on December 27, 1956. Since then the Birla trust has taken care of the maintenance.

Nichidatsu Fujii Guruji was the first disciple to fulfill this Prophetic vision of Nichiren Diashonin as the only way to repay boundless debt of gratitude to the Buddha in his original land of dharma.

A marble stone plaque, on the wall of the temple, states “the temple is open to all Hindus (including Harijans).”

According to Morita, while the temple might not see the number of devotees like the nearby Siddhivinayak Temple, many of Dr Ambedkar’s followers, foreigners and Japanese businessmen continue to stream in. “Every now and then tourists and students from various schools come to visit the temple,” he said. Dr BR Ambedkar also visited this temple during his lifetime.

“The temple was constructed not only to spread the message of Buddhism but also to improve trade relations between India and Japan. At the time of construction of the temple, there were around 1,000 to 3,000 Japanese traders living in Mumbai. This community has shrunk to 600-700 people now,” said Morita.

You can hear the chants accompanied with drum beating, “Na mu myo ho ren ge kyo,” every morning from 6 am to 7am and in the evening from 6 pm to 7.30 pm. There are annual ceremonies held on 1st January, Ambedkar Jayanti, Buddha Jayanti and during Dussehra. These ceremonies are a grand affair witnessed by many.

There is also a Marathi kindergarten in the backyard of the temple for poor kids. Meanwhile, located at some distance in the same area is one of the oldest cemeteries in the city, which belongs to the Japanese community. Located at a corner of the Hindu cremation ground, it was built in 1907.

Japanese Buddhist, like Hinds cremate their dead but instead of disbursing the ashes, they enshrine them. There is a prayer ceremony once a year attended by people from the community and counsulate in November at the cemetery. This time, the prayer will take place on November 11, and witness the coming together of the community for whom over time Mumbai has become home.
TOP