BODH GAYA, India -- It appears on your right as you go around the temple, and you wonder at once if that is the tree: an ancient-looking, sprawling tree with a massive trunk and a zone of deep, hypnotizing shade at its center. A middle-aged Japanese man dressed in white, wearing a mask, is meditating in its shadow. Behind him two Tibetan monks are counting off their prayer beads and whispering. 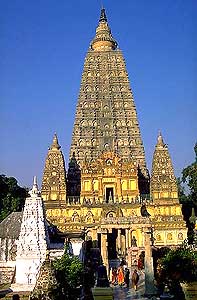 But as you walk to the back of the temple, you see another tree, even larger, with green metal beams holding up its branches. There is a stone fence around it; a sign says, PRINCE SIDDHARTHA ATTAINED BUDDHAHOOD [FULL ENLIGHTENMENT] ... SITTING UNDER THIS PEEPUL [BODHI] TREE.

So that is the tree. A group of Sri Lankan monks in golden robes gather and sit down before it. They recite from their prayer books, and their words boom around the temple complex over loudspeakers: "Buddham Sharanam Gacchami"--I go for refuge to the Buddha.

The tree in Bodh Gaya, a town in eastern India, is the holiest place in all Buddhism.

According to local lore, the tree is a direct descendant of the bodhi (a type of fig tree) where a prince named Siddhartha Gautama attained enlightenment 2 1/2 millenniums ago and became the Buddha. Today Buddhism is a religion associated with East Asia--with Thailand, China or Japan--where most of the world's Buddhists live. Yet Buddhism began in India at that very spot.

The Buddha was born in Lumbini, Nepal, lived in eastern India, attained enlightenment in Bodh Gaya and then wandered the nearby country, preaching and making his first converts. For hundreds of years after his death, as Buddhism spread, pilgrims came from as far away as China and Central Asia to see the places where the master lived and preached.

The sacred tree at Bodh Gaya is holy ground, but pilgrims also went to see Sarnath, where the Buddha preached his first sermon; Rajgir, where he came to meditate during the monsoons; Vaishali, where the beautiful courtesan Amrapali made him a gift of a mango grove; and Kushinagar, where, lying on a bed under two trees, he died.

Buddhism withered in India in the Middle Ages; the great temples and monasteries were destroyed by invaders and the pilgrims stopped coming. In the 19th century, pilgrims from Burma and Sri Lanka rediscovered the trail, renovated and rebuilt ruined monasteries and temples, and the Buddhist pilgrimage circuit slowly revived.

These days it is again becoming a booming tourist trail. Officials of the temple at Bodh Gaya estimate that 15,000 foreigners come each year to see the holy tree.

Peak season is from November to March, when the temperature drops, but there are pilgrims year round. "It's very peaceful here. It's easy to meditate," says Sato Yuji, 41, a Buddhist from Japan who has visited Bodh Gaya regularly for the past decade.

Most pilgrims are from East Asia, but Americans and Europeans also visit. "You can feel thousands of years of prayers vibrating in the air," says Manu Hari, a Swiss-born convert to Buddhism who is meditating near the temple. With every major Buddhist community from Sri Lanka to Japan having constructed a monastery in the city, Bodh Gaya has virtually turned into a United Nations of Buddhism; at night, as Tibetan monks cycle around to buy groceries, the streets resound with gongs being struck from inside the various monasteries.

Going to Bodh Gaya takes not just faith but also a pinch of bravery. The city, like many other key Buddhist sites, is located in the state of Bihar, the poorest and most backward part of India. Pilgrims must endure bad roads, scenes of grinding poverty--and lawlessness. Because Bihar is infested with Maoist guerrillas, all travel has to be completed by evening, and it's insane to be on the roads outside the city at night.

Despite the hazards, the pilgrims keep coming. You can reach Bodh Gaya by flying from New Delhi to Patna, the capital of the state of Bihar, and hiring an SUV for $45 for a bumpy three-hour road trip or by taking a train to the Gaya, half an hour away.

You won't find anything remotely like a luxury hotel in Bodh Gaya, but the Lotus Nikko (about $70 a night for a double room) is comfortable. Some monasteries also offer rooms to visitors.

Bodh Gaya has benefited the most, but the pilgrim business, like a magic wand, is transforming places all along the Buddhist circuit. Kushinagar, in Uttar Pradesh, appears at first glance to be another no-hope town: many of the sugar mills that employed the townspeople have recently closed, and unemployment is rampant. Yet the town is seeing a real estate boom, roads are markedly better than anywhere around and children go to well-maintained schools. Kushinagar is where the Buddha died, and pilgrims come to see the gilded statue that commemorates the spot where the Buddha attained nirvana as well as a brick monument built in the field where he was cremated. "The only improvement we have seen here is because of the monasteries and the Buddhists," says Laldhar Yadav, who owns a cloth shop.

Like every shopkeeper and hotel manager on the Buddhist trail, Yadav complains that the government could be doing more: although India's central and state governments insist that promoting the Buddhist trail is a priority, most of the connecting roads are poor, trains don't run on time, tourists who face problems won't get any help from the police and finding foreign exchange is often impossible.

Still, amid the hassles and dangers, there are, for the faithful, moments of transcendent beauty. Second only to Bodh Gaya in importance on the pilgrimage circuit is Sarnath, where the Buddha went after his enlightenment to meditate in a deer park and preach for the first time. By daytime the deer park is unimpressive. As the sun sets, though, the brick ruins of the monasteries glow incandescently amid the lush green grass. Just beyond the park's walls, a peacock climbs the roof of a Burmese Buddhist monastery to watch the sunset. In the other corner, near a statue of the Buddha preaching to his first five disciples, visitors gather around a monk who starts reciting the master's first sermon. As you listen, it is as if 2,500 years have been rolled back and you are hearing the Buddha himself, talking of why there is so much suffering on earth and what can be done to end it.