Rinpoche identity to be investigated

KALIMPONG, North Bengal (India) -- Controversy has always dogged the Shabdrung Rinpoches, once religious leaders of Bhutan, especially after the late ninth Shadrung Rinpoche Naung Gigme, a member of the Drukpa Kargyud sect of Buddhism, was sent into exile in India in the early 1960s. He was based in Manali and in 2000 came to head Sanchen Dorje Gompa at Pedong, one of the oldest monasteries in the region. 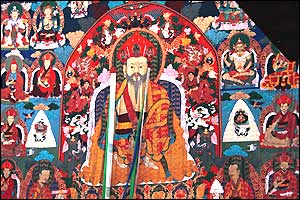 The present reincarnation, who is all of two-years-old, will give his devotees in Pedong a “darshan” tomorrow before proceeding to Bhutan to face the reincarnation committee who will investigate his identity as the true Rinpoche.

The reincarnation committee bears the onus of verifying Jigdrel Ngawang Namgyel as the true embodiment of the Shabdrung Rinpoche. He was first identified and put forward by Urgen Thinley, himself a claimant of the title of Karmapa. Thinley has the approval of His Holiness Dalai Lama as the Karmapa.

The Rinpoche was secretly transferred to Bodh Gaya in December 2004 at the tender age of eighteen months because of a perceived threat to his life, allegedly from vested political interests in Bhutan.

By calling him back to Bhutan to check his identity, the reincarnation committee is sending out mixed signals. As a temporal leader, the Rinpoche will exercise great influence on citizens of Bhutan after many years of exile.

Sources have maintained that the Bhutan government now views Shadrung Rinpoche as a threat to their authority.

This is primarily because the Rinpoche is recognized by bodies and entities outside the sphere of the Bhutanese government, for instance the aspiring Karmapa, Urgen Thinley. Thus by calling the Rinpoche back after years of exile, the government is trying to put their stamp of approval on the Rinpoche as the temporal leader of the people.

The secretary of Delhi-based Shabdrung Rinpoche Charitable Trust, Lama Sonam Dorjee who will be accompanying the Shadrung Rinpoche, said. “We will head for Bhutan the day after tomorrow where the reincarnation committee will examine the tenth Shabdrung Rinpoche and we will return to Bodh Gaya on 23 October.”

Perhaps the most dynamic era in Bhutanese history came in the 17th century with the arrival, in 1616, of Ngawang Namgyal, the great leader of the Drukpa school of Mahayana Buddhism.

Over the next 30 years Shabdrung Ngawang Namgyal unified the country and established the foundations for national governance and the Bhutanese identity.

Starting with the Simtokha Dzong in Thimphu, the Shabdrung (meaning "at whose feet one submits") constructed important dzongs, monasteries, and religious institutions and firmly established Drukpa Kagyu as the state religion.

The Shabdrung also left as his legacy the dual system of government - the temporal and theocratic - with Je Khenpo (chief abbot) as the religious head and the temporal leader known as the Desi. This system took Bhutan to the turn of the 19th century, until the birth of the Wangchuk dynasty and establishment of hereditary Monarchy in 1907. After the rule of 54 Desis and 60 Je Khenpos, the Trongsa Penlop, Jigmi Namgyal, emerged as a strong leader and was succeded, in 1881, by his dynamic son, Ugen Wangchuk. It was Gongsar Ugen Wangchuck who brought the entire nation under his rule, ending generations of strife and conflict.

In 1907, a historic Assembly of the clergy, the official administration, and the people unanimously elected Gongsar Ugen Wangchuck as the first hereditary King of Bhutan.

Gongsar Ugen Wangchuck reigned until his death in 1926, and was succeeded by his son Jigme Wangchuck, who ruled the kingdom until 1952.

The reigns of the first two Kings were marked by political stability. It was the third King, Jigme Dorji Wangchuck, who gently introduced the process of modernisation.

Known as the "Father of the Modern Bhutan", King Jigmi Dorji Wangchuck initiated planned development and thus began the dramatic changes in the quality of life of the people. He also enhanced the kingdom's global role, making Bhutan a member of the United Nations and other international organisations.

King Jigmi Dorji Wangchuck ruled from 1952 to 1972. In 1972, King Jigmi Singye Wangchuck became the youngest Monarch in the world. With a strong emphasis on preserving the rich religious and cultural heritage, the dynamic young Monarch then steered the kingdom through more than 20 years of development, towards the 21st century.