What?s Kalachakra all about?

AMARAVATI, Andhra Pradesh (India) -- Kalachakra is a Buddhist tantric tradition belonging to the ‘highest yogic tantra,’ the empowerment for, which was taken up to a large number of people in Tibet. 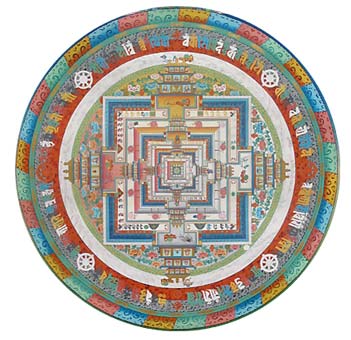 External Kalachakra deals with external world systems such as the movement of the Sun, Moon and other constellations.

Internal Kalachakra refers to the elemental structure of a human being such as the channels, energies and regenerative fluids.

The Alternate Kalachakra refers to the generation and completion of stages of the spiritual path of Kalachakra that purifies the objectives, which in this context are both the external as well as internal.

As a result of such purification, one may locate the personal deity, the glorious Kalachakra, with four faces and 24 arms and the seven-featured state of union.

Kalachakra was first taught in India on the 15th day of the 3rd month, in the year following Buddha Shakyamuni’s enlightement.

Buddha also simultaneously taught the ‘Perfection of Wisdom’ at Venturer’s Peak near Rajgir, and the Kalachakra root tantra at Sri Dhanyakataka (Amaravati) to a host of devout followers led by Suchandra, the King of Shambala.

In Tibet, the teachings were first propagated by translator Gyi-jo Lotsawa Dawa O-ser, 1171 years after the Buddha’s Nirvana, which was the Fire-Rabbit Year of Tibetan calendar, according to Kashmiri Pundit Shakyashri’s system of calculation.

According to Tibet’s Information Department deputy secretary Jigmey Tsultoim, the chief purpose of holding the Kalachakra is to teach Buddhist dharma to the disciples to attain the eternal glory and to follow the principles of Dharma by listening and self-enlisting through the discourses.