Varanasi, India -- An ecumenical group of Korean women drew praise from no less a figure than the Dalai Lama when they visited the Tibetan spiritual leader in exile in northern India. The Dalai Lama said he was happy to see the group make a pilgrimage to achieve harmony among different religions and peace in the world. 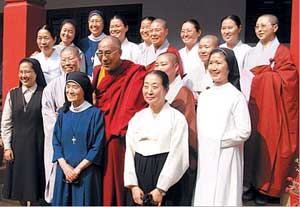 The 16 women -- Buddhists, Won Buddhists, Catholics and Anglicans -- met the Nobel laureate at the Tibetan Buddhist college in Varanasi. Samsohoe, as the group calls itself, set off from a sacred ground of Won Buddhism in Korea on Feb. 5 and will visit other important sites for their respective religions in India, the U.K., Israel and Italy during their 18-day pilgrimage.

“I launched a campaign to achieve religious harmony around 1975, and it's a great pleasure to see that you are putting these ideas into practice,” the Dalai Lama said. "Religions have served and serve even now as a source of bloody conflict. Religious harmony is the most important factor in promoting world peace.” “I have visited Christian sacred sites such as Jerusalem and Fatima many times with the mindset of a devout Christian,”

The exiled leader used the example of food to illustrate his point. “What kinds of food do Koreans eat? Oh, kimchi. Just like Koreans, Chinese, Japanese, Tibetans and Indians all have their own indigenous food. All of them have a tongue, mouth and teeth that are very much the same, but they enjoy different tastes. That shows why we need to accept diversity.”

Since his visitors were women, the Dalai Lama said, "Take a look at mammals. Males only pursue pleasure but females always care. That's the way nature works. Females are far better at spiritual cultivation and forgiveness. Physical strength was important in the past. Today, leaders must be intelligent. In this modernized society, it is spiritual ability that makes someone a leader.”

These ideas are also applicable to the inter-Korean relationship, he suggested. "North and South Koreas are the same people and they have same culture and language. Now what they have to do is to get unified in a legitimate way. We saw Germany unified, and we saw Vietnam: I hope that the two Koreas will be unified without a war.”

The group say they appreciated the Dalai Lama’s humor and his skill in making others relax in his presence. And while the meeting was short and started later than expected, the women were impressed. Some of them had tears in their eyes. Jin Myeong, a Buddhist nun, said it seemed “really a short wait and a long meeting.”