Dharmsara, India -- His Holiness the Dalai Lama often imparts teachings on the ‘Bodhisattvacharyavatara’ (A Guide to the Bodhisattva’s Way of Life), an 8th century text by Shantideva, the Buddhist master from Nalanda. 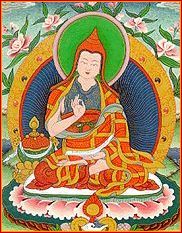 The bodhisattva is a Mahayana ideal, a noble being who vows to work towards his own enlightenment yet postpones his own entry into nirvana until he has led all living beings to liberation. His is the most positive way of life, the ultimate altruism possible. And is open to lay people and monastics alike.

The bodhisattva is willing to sacrifice even his own body, should it help a being take a step towards liberation. Embodying compassion, he is aware through his infinite wisdom, that no beings truly exist.

How does a bodhisattva arise in this universe? Shantideva says that virtue is perpetually feeble and can only be conquered by an awakening mind— the bodhicitta. In a verse of profound beauty, he says:

Just as a flash of lightning on a dark, cloudy night
For an instant brightly illuminates all,
Likewise in this world, through the might of the Buddha,
A wholesome thought rarely appears.

Urging the practitioner to seize this wholesome thought, Shantideva shows him how it can be cultivated and the bodhisattva vow taken. He then leads you through the practices of morality, patience, enthusiasm, meditation and wisdom that will help you achieve your goal of nirvana. The path of the bodhisattva is not confined only to Mahayana.

The Jataka tales, which form part of the Theravada canon, narrate the earlier lives of Gautama Buddha as a bodhisattva who had toiled for eons to dispel the misery of living beings, even offering his own body to a hungry tigress, who was too weak to nourish her newborn cubs.

The Dalai Lama declares that he has been deeply inspired by Shantideva as he eloquently prays in the final chapter of the text:

For as long as space endures
And for as long as living beings remain,
Until then may I, too, abide,
To dispel misery in this world.