CHENNAI, India -- Vesak is the holiest day in Buddhism and it marks the birth, the Enlightenment, and the passing away of the Buddha. This day is celebrated all over the world and in Chennai too Vesak was celebrated in grand style. 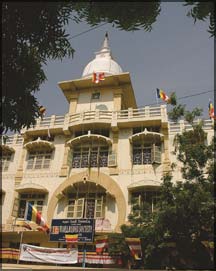 << The Mahabodhi temple at Chennai

The Mahabodhi Society of Sri Lanka Chennai Centre took a lead role in this which saw the participation of many Sri Lankans and Indians. It was assisted by Ven Palpola Vippassi Thera of Palpola Vippassi Foundation in Sri Lanka.

Mahabodi Society is one of the few places that propagate Buddhism in India. The Society took special interest to celebrate this year's 2550 Vesak in a grand scale. The Mahabodhi building was illuminated colourfully and Vesak lanterns enhanced the Vesak feeling. The Mahabodhi Society coordinated many religious activities on two days with the participation of leading Buddhist monks in Sri Lanka. At the event, observation of Astanga seela was held and the entire event was broadcast to Sri Lanka.

As a part of the celebration many Buddha Poojas and almsgivings were held to mark the 25 50th Buddha Jayanthi.

He said that they have all the resources to conduct the temporary ordination programme, which is very popular among the Tamils living in Chennai. There was a remarkable increase of Tamils embracing Buddhism in Chennai, he said.

Ven. Sumana also said that many leading Buddhist monks including Ven Niyangoda Vijitha Thera, Ven Welimada Dammagawesi Thera, Ven. Dr. Thiniyawala Thera and Ven. Banagala Upathissa Thera were some of the venerable participant monks at the Chennai Vesak celebrations. Ven. Sumana Thera said that many bhikkhus delivered their Dhamma desana both in Tamil and Sinhala at the event.

Further, on the day of the Vesak a meditation programme and pirith-chanting programme were organised to make this year meaningful, he said. On the 13th of May medical camps and an eye camp were held at the Mahabodhi main hall.

Several lecture programmes on Buddhism were organised by Mahabodhi Society by Professor S. Pathmanathan, University of Tamil Nadu and a special Vesak lecture was presented by the Commissioner of Customs-Chennai S. Subramaniam. Ambassador and Deputy High Commissioner for Sri Lanka in South India Sumith Nakandala released a book on Buddhism.