Patna, India -- President of India A.P.J. Abdul Kalam called it renaissance as part of his “mission for Bihar’s prosperity” and Nitish Kumar seems to have taken the idea seriously. If things go according to plan, then the process initiated by the chief minister will bear fruit to give Bihar an international, multi-discipline university near Nalanda. 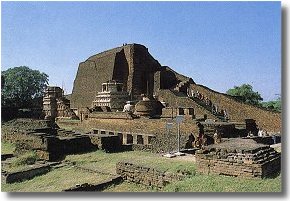 << The original Nalanda University, the centre of Buddhist education (circa 5th century BCE)

The government today gave in-principle approval to the opening of an Indo-Asian institute of learning near Nalanda. The nod came during a meeting with a nine-member delegation, which included Hirohide Uozumi, a member of the Japanese parliament.

The delegation arrived in Patna from Delhi after meeting the President, who has shown keen interest in the proposal. It later left for a tour of the spot.

Addressing a joint session of the Bihar legislature on March 28, Kalam had said, “The institute, which will have the status of university, will be… unique in the world. In addition to teaching and research in (the) traditional areas of sciences, engineering, medicine, technology, humanities, social sciences, linguistics and management studies, a strong component of Buddhist studies will be introduced not merely as a separate department but also as part of work for all faculties.”

“A number of multi-disciplinary studies on conflict resolution, peace, sustainability and eco-systems will also be part of the institute’s agenda. The focus of this university can be the evolution of a world free from crime, terrorism and war. The university should work for the creation of enlightened citizens,” the President had suggested.

Nalanda, an ancient seat of Buddhist learning and other disciplines, is home to the ruins of an illustrious university. The ancient city of Rajgir, the venue of one of the Buddhist councils, adjoins it. The twin cities complete Bihar’s Buddhist circuit along with Bodh Gaya, Vaishali and Lauria.

Bihar human resource development secretary M.M. Jha said land for the university has been identified. It is a tract of 450 acres and the project is likely to cost upward of Rs 500 crore.

“Laws for the project are being framed and some procedural formalities remain after which we will start the process of acquiring land. Apart from the Japanese government, some organisations from the United Kingdom and the United States have also shown interest in the proposal and they will be co-opted as partners. We expect to start work on the project in six months,” Jha said, adding that the “share” of the Japanese in the scheme will be “substantial”.

The chief minister said the government was keen to see the project take off. Nitish has maintained that developing the sites that detail the history of Bihar was a good way to improve the state’s image while also contributing to its development. “We will extend maximum cooperation to the university project,” he said.

The value of the President’s advice on developing the Buddhist site has not been lost on the Union tourism ministry as well.

During her visit to Bihar, tourism minister Ambika Soni had promised to pump in more funds for a facelift of legacy sites of the state, especially during a year when Lord Buddha’s 2550th birth anniversary is being celebrated. Hudco will assist in a mega project to upgrade the infrastructure in Bihar’s Buddhist circuit.