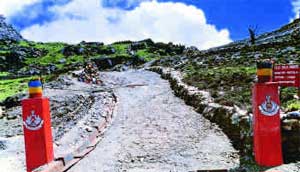 << Trading to resume at the 15,000-foot (4,545 metre) Nathu La Pass on the border between India's Sikkim state and China's Tibet region, the first time since the 1962 border war between the two countries.

Alongside the Lama is a group of about 20 Buddhist priests - eyes closed and hands folded, chanting religious hymns. After a while, the group breaks up for lunch, their faces radiant and all of them looking cheerful and happy.

'We all said a prayer now. In fact, this is a special prayer and we have been offering such prayers daily for the past two weeks,' Lama told IANS.

The daily special prayers would continue until Thursday when India and China reopens the famed Silk Road for border trade between them. 'We prayed so that our dreams of offering prayers at Lhasa becomes a reality. Now with the Silk Road opening once again, we think our prayers are answered,' Ongda Lama, another young priest, said.

'There is excitement everywhere, especially among the Buddhist monks. It is the wish of every Buddhist to one day go to Lhasa and offer prayers at the Potala,' Sonam Lama, a tribal Bhutia monk, said.

For the nearly 120,000 Buddhists in this Himalayan state of some 540,000 people, the reopening of the ancient Silk Road is a matter of great excitement. The Potala is Lhasa's cardinal landmark and since its inception in 1600 it remained the home of successive Dalai Lamas - the Tibetan spiritual and temporal leader.

The Buddhists in Sikkim are followers of the Dalai Lama. The distance from Gangtok to Lhasa is about 483 kilometers (about 300 miles). 'I am now waiting for the day when I can go to Lhasa. We have our religious roots there,' Buddhist chantmaster Kunzang Norbu said.

While the local Buddhists welcome the reopening of the Silk Road or trade, there are some apprehensions that Tibetan people would take advantage of the open border to usurp Indian land.

'We must be really watchful and remain vigilant as we cannot allow Tibetans to come and occupy our land in the pretext of tourism, trade or even visiting religious sites,' Rajesh Lama, a businessman in Gantok and a Tibetan Buddhist practitioner himself.

Nathu La was a major trading point between the two countries before the 1962 war. It was also one of the main arteries of the Silk Road which historically linked China via Central Asia to Europe. Business would be duty-free when formal trade begins Thursday with India able to export 29 items ranging from textiles and blankets, agricultural implements, liquor, cigarettes, tea, barley, rice, vegetable oil, and local herbs. Chinese trader would be able to trade in 15 items from horses to goats and sheep, yak tail, yak hair, goat skin, wool, and raw silk. A study conducted by the Sikkim government says bilateral trade was expected to reach $ 12 billion by 2015.