Ahmedabad, Gujarat (India) -- Christians and Muslims in the western Indian state of Gujarat have expressed resentment over an amendment in the law relating to religious conversions. 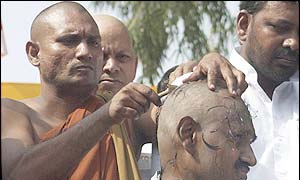 << Head shaving as part of religious conversion in Tamil Nadu

They say that moves by the state government to classify Buddhism and Jainism as branches of the Hindu religion are unconstitutional.

Christians and Muslims have accused the authorities of trying to polarise the state along religious lines.

But backers of the amendment say it will protect low caste Hindus.

They say that such groups are vulnerable to exploitation and pressure for them to convert, which is undermining India's Hindu culture.

Under the Indian constitution, Buddhism and Jainism are classified as separate religions.

The government is accused of trying to preserve its vote bank

But under the terms of the amendment passed by the right-wing Hindu nationalist Bharatiya Janata Party (BJP) Gujarat government on Tuesday, both are classified as part of the Hindu religion.

That means that Buddhists and Jains will not need official permission to change religion, because it would be deemed to be an "inter-denomination conversion".

Gujarat's Law Minister, Ashok Bhatt, said the amendment was introduced because the constitutional definition of the term ''convert'' is too vague, and does not specifically mention a particular religious denomination.

However, the leader of the state's opposition Congress party said the Gujarat government was using religion as a "tool" to maintain its bedrock of votes.

The government's critics say it wants to ensure that low caste Hindus - known as Dalits - do not embrace Christianity or Islam and therefore be less inclined to vote for the BJP.

Other states in India - including Tamil Nadu hand Rajasthan - have also drafted laws preventing religious conversions, but none has introduced an amendment similar to that passed by Gujarat.

Conversions are a contentious issue in the state, particularly in tribal belts where the BJP and other right wing parties have accused Christian missionaries of offering enticements for people to change religion.

Christian groups have denied the charges.

It is estimated that Christians constitute less than 0.5% of Gujarat's population, whereas about 85% of the state are Hindus. Muslims in the state account for around 14% of the total population.

The Freedom of Religion Act in Gujarat was passed in 2003, but has not yet been implemented by the government.