Mumbai, India -- The Buddhist community is upset at being clubbed with Hindus in the Gujarat Freedom of Religion Bill 2003 passed on Tuesday. 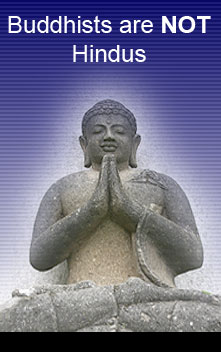 Buddhist community leaders say they don't like being called Hindus, even though they are sometimes influenced by Hindu customs.

Thousands of Dalits gathered in Mumbai at a ceremony to convert to Buddhism. There is now anger among this community, after the Narendra Modi government passed the Gujarat Freedom of Religion Bill 2006 on Tuesday that clubs Buddhists with Hindus.

The new Bill essentially means that the government makes no distinction between Buddhism and Hinduism. Professor Arun Kamble, President of the World Buddhist Conference takes umbrage to that.

Kamble says, “We denounce Hinduism because of the caste system. So we embraced Buddhism. The basic element of Buddhism is liberty, equality, and fraternity."

Critics of those opposing the Bill say some neo-Buddhists are influenced by certain Hindu customs and symbolisms. So why the hue and cry? The Buddhist community admit this influence, however, they feel it is only temporary.

Author J V Pawar says, “I know today there some half Buddhists and half Hindus. You will find that in the villages. They follow some Hindu rituals. But this only for the time being. It won't be a permanent feature."

The tenets of Buddhism and Hinduism are completely different according to the Buddhist community. They question why the Gujarat government cannot accept that.