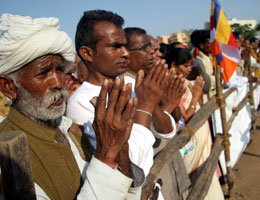 Marking the change of faith, the Dalits were administered the oath by Bante Bodhi Dhama, a Buddhist monk from Japan.

Preceding the ceremony, "Buddha Dharma Deeksha Pratigne", a huge procession led by more than 500 monks, was taken out through the city streets.

Bante Bodhi Dhama said Buddhism safeguarded the interests and well-being of all human beings without any discrimination. There was no room for superstitions in Buddhism.