KOLKATA, India -- More than 3,600 Buddhist antiques have been smuggled out of the eastern Indian state of Bihar in the past one year, forcing police to set up a special force to tackle the menace, officials said on Tuesday. 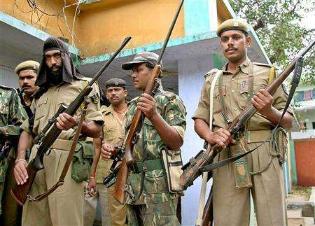 << Policemen stand guard in the Gaya area of the eastern Indian city of Patna, in the state of Bihar, in this October 20, 2005 file photo. More than 3,600 Buddhist antiques have been smuggled out of the eastern Indian state of Bihar in the past one year, forcing police to set up a special force to tackle the menace, officials said on Tuesday. REUTERS/Krishna Murari Kishan

"We are deeply concerned about the situation and stopping smugglers is a major challenge," Arun Chandra Verma, a top police official told Reuters from the state capital, Patna.

Rare and priceless Buddhist idols and other relics have also gone missing from the neighbouring states of Jharkhand and Orissa in the past year, police and archaeologists said.

Verma said a special force -- led by 25 specially trained officers -- has been set up to bust smuggling rackets in the region.

Buddhist relics are in great demand in Japan, China and Thailand where Buddhism is deeply rooted, as well as in Europe where a single idol can easily fetch tens of thousands of dollars.

Buddha is believed to have attained enlightenment in Bodh Gaya in southern Bihar in the 6th century BC, according to religious scholars and archaeologists.

Impoverished Bihar, which is dotted with Buddhist monuments, is also one of India's most lawless states where killing, kidnapping and extortion is rampant.

Criminal gangs have taken advantage of the lack of law and order in the state, together with poor policing at Bihar's 725 km (450 miles) porous border with Nepal to smuggle out the priceless relics to other parts of Asia and beyond, say officials.

Last month, 18 bronze statues of Buddha, made between the eight and 12th centuries were stolen from a museum in Patna, which also houses Buddha's ashes in a casket.

Experts say a rare three-foot (one metre) tall Buddha statue, hundreds of other bronze and stone idols and thousands of old manuscripts depicting Buddha's teachings have also gone missing in the past 15 to 20 years, showing up in museums abroad.

"A few years back, a rare Buddha statue was traced to a museum in the U.S.," Ramswarup Singh, a senior archaeologist with the Magadha University in Bihar, told Reuters. The museum eventually returned it to India.

Last week, a 1,600-year-old bronze statue of Buddha was found in the neighbouring state of Uttar Pradesh and several members of an international gang of smugglers were arrested.

Bhikkhu Bodhipala, chief priest of the Mahabodhi temple in Bodh Gaya -- a place of pilgrimage for Buddhists from around the world -- says India is losing its rich heritage every day.

"We must preserve whatever is left, before it's too late," he said.