New Delhi, India -- With support from Singapore, Japan and other countries interested in Buddhism, India's ancient Nalanda University, dating back to 5th century B.C., may soon be restored to its past glory as a primary seat of learning in Asia. 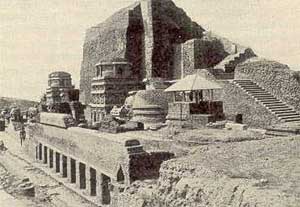 << Ruins of the ancient Nalanda University

An ambitious 150 million US-dollar project was unfolded at an international symposium titled 'Reviving Buddhist Cultural Links', held here this week. Essentially a joint venture between the provincial government of India's eastern Bihar state -- where Nalanda is located -- and the Singapore government, it envisages the participation of several countries with large Buddhist populations, including Sri Lanka, Thailand and China.

Opening the symposium on Monday (13 November) , Singapore's foreign minister George Yeo said the project was not about the religion but "Buddhist values and philosophy which have become an integral part of East Asian civilisation".

Yeo added that as Asia reemerges on the world stage, Asians could "look back to their own past and derive inspiration from it for the future." Thus he noted, "We should develop Nalanda as an icon of the Asian renaissance, attracting scholars and students from a much wider region as the ancient university once did."

Indian President Abdul Kalam, delivering a keynote address via live multimedia videocast from New Delhi, described the project as a "model for evolving a happy, prosperous and peaceful society in our planet" and helpful in the "evolution of the enlightened citizen." The process, he said, has three components -- education with a value system, religion transforming into spirituality and economic development for societal transformation.

"The mission of unity of minds is indeed gaining momentum from Bihar, the birthplace of ancient Nalanda," observed Kalam.

The symposium was attended by over 200 Asian scholars, government officials and Buddhist monks and nuns from Singapore, India, Thailand, Japan, China and manyother countries.

N.K Singh, deputy chairman of the Bihar Planning Board, told the meeting that land for the project has already been allocated near the ancient Nalanda university site, and a bill to establish the university is expected to be passed by the Bihar state assembly in the third week of December.

"The government of Bihar is going to put in its own resources... but we also hope to supplement it through an international consortium," Singh said, adding that Japan and Singapore have already expressed interest in funding the project with the latter showing a desire to be the "principle catalyst" in conceptualising the project.

Singh said he expected Singapore to bring together countries in the region to participate in the project and offer its expertise in the management of the university.

Responding to concerns raised by some Buddhists that this university may have a secular framework, Singh said the concept of the university would be very broad ranging and "represent what Nalanda was at the time (of its foundation)."

Though already a seat of learning while the Buddha was alive, Nalanda University was founded by Kumaragupta I of the Gupta dynasty during the golden age of classical Indian culture. It came into preeminence as a centre of Buddhist scholarship between 5th and 12thcenturies.

Nalanda at the height of its glory accommodated over 10,000 students from across Asia. The famous Chinese scholar Hsuan Tsang is believed to have spent many years there, lecturing and writing his 3,000 stanza work on the 'Treatise on the Harmony of Teaching.'

According to historians, Nalanda was key to the spectacular spread of Buddhism during this period to Sri Lanka, China, Korea, Japan, Tibet, Thailand, Vietnam, Burma, Cambodia, and Laos. Today it has 400 million followers or approximately half the number of those who practice Christianity and a third of those who practice Islam.

Nalanda was destroyed in the 12th century by Turkish Muslim invaders who burned down the library and the buildings, and killed many of the monks and scholars who could not flee. The site was abandoned. Speaking at the symposium, Chinese Buddhist scholar Prof. Tan Chung, described Nalanda as "the oldest precursor of Oxford and Cambridge - a fortress of learning."

According to the Chinese academic, ''China would not have been what it became but for the beneficial cultural influence of India." He argued that when the Han Dynasty was on the verge of collapse by the 6th century, it was the Buddhist influence which reunified China under the banner of Sui, whose rulers Emperor Wen and Emperor Yang both proclaimed themselves as the disciples of the Buddha.

Prof. Tan argued that Nalanda offered China a model where great centres of learning based on monasteries and temples could provide commoners lives that throbbed with spirituality and wisdom. "China during pre-Buddhist days could not have such vitality, and learning was the monopoly of a handful of families.

The advent of Buddhism made a sea-change and China came alive as a popular land of spiritualism and wisdom. This development co-prospered with the introduction of the all-China Imperial Examinations and the civil service".

Others saw the project as way to get Asian giants India and China closer. In a passionate plea Prof. Wang Dehua, of the Shanghai Municipal Centre for International Studies said: ''Let's forget about the 1962 incident (India-China war).

This project will symbolise the rebuilding of our old friendship and understanding. In the future we will be able to reach the dream of an Asian community with a project like this.''

Prof Tavivat Pantarigvivat of Thailand's Mahidol University suggested that Nalanda should be established with the clear idea of a world religious university with a Buddhist focus, "to propagate compassion towards other religions". She offered Thailand's expertise in running such Buddhist universities in the development of the project. With India emerging in the 21st century and becoming a knowledge-based society, "reviving Nalanda symbolizes the hopes and aspirations of South and East Asians that the civilisations of Asia will rise again based on knowledge and cooperation,'' observed Balaji Sadasivan, Singapore's junior minister for foreign affairs.