Patna, India -- IN A throwback to times when a journey across the Himalayas entailed adventure, hardships, and steely resolve, two monks set off from the southern Chinese city of Guangzhou on Wednesday, to retrace the steps of the seventh century Buddhist monk Xuan Zang (also known as Hieun Tsang). 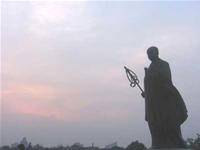 <<  Two Chinese Buddhist monks - 33-year-old Mingxian from East China's Jiangxi Province and 36-year-old Huikuan from Taiwan - to follow in the footsteps of a famous predecessor, Xuanzang (602-664 AD), on a journey from China to India.

The monks arrived in Nalanda, south of Patna, on November 20, having completed in four months a journey that took Xuan Zang several years. They will walk for parts of the trip but also drive over the more arduous sections.

The modern elements of this seventh century epic remake do not end with four-wheel drives. The entire venture, which is taking place in the "India-China Friendship Year," is being sponsored by a local Guangzhou Media company, Shi Zun Ltd, and the trip will be televised in weekly instalments on Guangzhou TV.

On Wednesday, 108 monks from across China gathered in Guangzhou to hold a prayer ceremony for Shi Mingxian and Shi Huikuan the two monks who will be making the journey. Mingxian is from a monastery in Yunju Mountain in China's Jiangxi province, while Huikuan comes from the holy Foguang Mountain in Taiwan.

The trip thus also has symbolic significance, sending a message of peace and unity that cuts across troubled political relations.

The Chinese State Administration for Religious Affairs, the China Buddhist Association, and the Chinese People's Association for Friendship with Foreign Countries have come together to form an organising committee for the journey. The committee has described the event as having deep significance for cultural and religious communications between China and India.

Shi Mingxian says his travels are aimed at publicising the benefits Xuan Zang's stay in India brought to Chinese Buddhism. He adds, "Xuan Zang cherished peace and his intentions were pure. This is something we still need in modern times."

But aside from the lofty ideals of friendship and brotherhood, the journey also makes good commercial sense in modern day China. There is a strong Buddhist revival under way in China. During the Cultural Revolution (1966-76) religion was denounced as a feudal evil and the Chinese government remains officially atheist even today.

But in recent times Buddhism and other religions are being looked upon more benignly as a useful panacea for the anomie that arises in times of rapid social and economic change. Temples are thus being re-built and pilgrims are flocking to worship in record numbers.

Xuan Zang's travels to India formed the basis for a sixteenth century novel by Wu Chen'en called Journey to the West, (during the Tang dynasty "the west" referred to India) a story that continues to exert much fascination in contemporary China. One of the novel's main characters, the Monkey King (thought by some to be based on Hanuman) was thus a candidate for the 2008 Olympic Games mascot. Mingxian and Huikuan's journey with its historical resonance is thus as much of a sure-fire hit as can be anticipated, all of which combines to explain the Shi Zun media company's interest in sponsoring it.

The monks will be carrying gifts with them to hand over at Nalanda including a Liuzu sutra embroidered on silk, a Sakyamuni (Buddha) statue and a copy of the book Records of the Western Regions of the Tang Dynasty, authored by Xuan Zang himself with the help of a disciple, Bian Ji.

Xuan Zang began his epic journey to India in late AD 628. He travelled along the Silk Road through the barren Gobi dessert and the windswept passes of Central Asia before heading south to India. He was attacked by bandits, menaced by blizzards, and abandoned by his companions on the way, often having to travel by night and hide during the day.

When he finally arrived in India, Xuan Zang spent the bulk of his time at the monastery in Nalanda where he became a critic of the two major philosophical schools of Hinduism opposed to Buddhist doctrine at the time: the Samkhya and Vaiseshika. He developed instead an affinity for the Yogacara school of Buddhism, which he was to do much to spread once he returned to China.