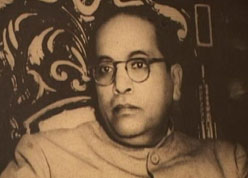 He continues to influence the course of Indian politics through his many disciples like Kanshi Ram, Mayawati, the Republican Party and the Dalit Panthers of Maharashtra.

Disturbing visuals that inundate our television screens after the shocking Khairlanji killings and the defacement of his statue in Kanpur are a reminder that Dr Ambedkar can still inspire passions.

In fact, Ambedkar's statues are often desecrated. But every time that happens, the father of the Indian Constitution, a neo-Buddhist, a messaih for the most underprivileged, comes back to tower over Indian politics.

Ambedkar is himself a political issue. He is even part of the explanations offered when Dalit violence breaks out.

"We are non-violent. But Dr Ambedkar differentiated by saying that there should be a need to kill, not will to kill," says Dalit Panthers' leader Arun Kamble.

But it's not always about violence and politics. The deification of the social engineer has its economic spin-off as well. Sculptors who may not have done justice to Ambedkar's memory have been paid handsomely.

Ambedkar badges and emblems have done good business even when market economy was a distant dream. His own books like Riddles of Ramayana have been on the bestsellers' chart.

And every intellectual dealing with caste conflict have tried his hand at solving the riddle called Ambedkar.

An epic film on his life is incidentally being released again, the makers aware that the controversies surrounding the icon could get the cash register ringing.

"Internationally or globally, wherever the presence of Ambedkar is there or wherever there is Buddhism, they are celebrating. So, why not we? says Jabbar Patel, a filmmaker.

Evoking Ambedkar's memory, renaming parks after him are all part of the contemporary political game. Even a silent Ambedkar, it seems, will have his say in the Uttar Pradesh polls. It's a legacy that everybody wants a piece of.