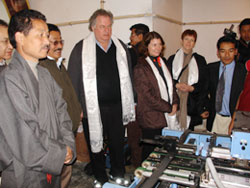 Congratulating the Tsenyi School (Institute for Buddhist Dialectics) for opening a printing press, the Education Kalon said that a printing press owned by Tibetan would be far more effective in rectifying errors and mistakes before printing any documents.

"And it will help us to produce hig-quality publications, which is one of the prime objectives of the Tsenyi Printing Press, he said.

The Tsenyi Printing Press was funded by the Flora Family Foundation through the Tibet Fund.