Back to old-school Buddhism at international chanting ceremony

Bodh Gaya, India -- The Second Tipitika Chanting Prayer Ceremony opened in Bodh Gaya, Bihar, India on Feb. 12. Over 500 monks and nuns, representing the six nations home to Theravada Buddhism (India, Sri Lanka, Bangladesh, Cambodia, Myanmar and Thailand), are participating in 10 days of dawn-to-dusk chanting of the Tipitika, the collected teachings of the Buddha, in the sacred Pali language. 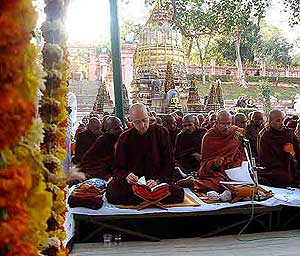 Sponsored by the Venerable Tarthang Tulku's California-based Light of Buddhadharma Foundation International (LBDFI), and co-organized by the Mahabodhi Society, this is the second in a series of annual events. Last year's ceremony, inaugurated by His Holiness the Dalai Lama, marked the first time in 700 years that monks have gathered here to recite the Pali canon in the place of Buddhism's origin.

Ancient sounds of "Namo tasso bhagavato arahato sammasambuddhasa" ("I bow to the blessed, perfect, enlightened one") ring as they did in centuries past from beneath the sacred Bodhi Tree, where the Buddha sat and achieved enlightenment some 2,550 years ago.

The chanting ceremony grew out of the Tibetan Rinpoche Tarthang Tulku's desire to revitalize Buddhism within the Indian sangha, the "Aryadesha" (Noble Land) of its origin.

"It is my father's wish to bring back the original teachings of the Buddha to their original place, and join the sangha under a single umbrella, chanting together in an Indian language," said the Tulku's daughter, Wangmo Dixey, who is chairman of the LBDFI.

Tarthang Tulku also founded the Nyingma Monlam Chenmo Prayer Ceremony, which also started rather small in 1989 with 500 participants. It is now attended annually by some 7,000 monks and nuns.

As Tarthang Tulku is a teacher of the Vajrayana School, the event represents a non-sectarian bridge between the sometimes-disparate Buddhist denominations of Theravada, Mahayana and Vajrayana. "We are here as supporters and donors for the Theravadin chanters. It is a great blessing for us to support the chanting of the early dharma texts," says Dixey from her seat beneath the Bodhi Tree's leafy branches. "To have six nations under the one sacred tree maximizes the impact of chanting these first three volumes of the Tipitika." 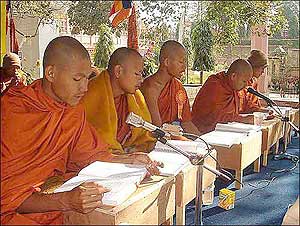 Monks from India, Sri Lanka and Bangladesh are seated together, while the Thais, Myanmar and Cambodians all chant in separate pavilions. This arrangement accommodates the differences in pronunciation, script and chanting style that have occurred over the past two eons of the Buddhist diaspora. The near future may find all the monks chanting in unison. "It is our great hope," says Dixey, "to eventually have a unified chanting style for such occasions." Last year, the Pali Tipitika International Council was formed; among its efforts will be the standardization of a uniform Pali chanting style.

Behind the tents, volunteers boil water and bring cups seasoned with lemon and honey to soothe the monks' tired vocal cords. The LBDFI provides housing and food for all 500 monastic participants.

All ceremony participants receive high-quality bound copies of the scripture, reprinted on durable ink with acid-free paper, designed to last 300 years. Amazingly, many monks had been persevering with dog-eared, photocopied texts, some of which were barely legible and not durable.

Copies of the Pali text in Romanized (English) script are also available to facilitate learning for Western students. And every evening under the Bodhi Tree are lectures in English, by senior Theravada scholars from Myanmar, Thailand, Sri Lanka and Australia, where an international crowd of clergy and laypersons brave the mosquitoes to gain greater understanding of the Buddha's words.

Like Buddhism itself, the Pali language, a relative of Sanskrit, originated on the Indian subcontinent. As Buddhism migrated from its Indian origins, the Theravada countries of southeast Asia and Sri Lanka became strongholds of Pali preservation.

Events such as this chanting ceremony, and the recent revival of Bihar's Nalanda University (a center for Pali study), indicate an Indian homecoming for the sacred language. Under the mighty Bodhi Tree's branches, it seems the Buddha's words have returned to their literal roots.