Leh, Ladakh (India) -- Perched high above the Himalayan town of Leh, a warren of traditional mud-brick houses squats by the ruins of the royal palace and a monastery, appearing to grow out of the mountainside. 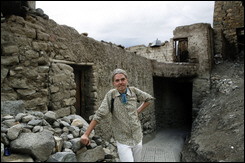 These homes in the capital of India's Buddhist Ladakh region which have stood for centuries are regarded as some of the best remaining examples of urban Tibetan-style architecture.

But conservationists are increasingly fretting about the survival of these medieval buildings in the Old Town which are now sadly dilapidated.

The New York-based World Monuments Fund in June put Leh's Old Town on a list of the world's 100 most endangered sites, citing a host of factors as cause for concern, including more rain from climate change in the usually arid region.

But although Leh last year received unusually heavy downpours that caused several of the flat roofs to cave in, a walk through the old area shows that decades of plain neglect are more to blame than anything else.

"Since the last 15 years people have been moving away," said conservationist Andre Alexander, head of the Tibet Heritage Fund, which has been working for the last four years to restore buildings in Old Leh.

"There's been a build-up of infrastructure in the modern town. The contrast has helped to convince people there's no future in Old Town."

In the past, when Leh was more dependent on farming, people cultivated land in the valley and lived on the hillside.

But in the past decade tourism has boomed -- more that 40,000 people visited Ladakh last year alone, officials say -- and the money it brought in allowed more people to move down to the modern part of town.

"They no longer need to do farming so they have sold the farmland or built it up," said the pony-tailed Alexander, originally from Germany.

Many of the former farms are now hotels or large houses, and many of the traditional homes on the hillside are empty.

Yet the three-floor houses are perfectly adapted for the cold, dry climate, with the thick walls great for keeping warmth in while numerous tall windows let in lots of sunshine.

They are beautiful too, with carved wooden window frames and narrow stairs that lead out to rooftop terraces that look out over the valley below.

Alexander's conservation group offers financing to locals still living in the area, mainly poor labourers, to help them restore their homes, which can cost as much as 1,250 US dollars.

"Before the roof was coming down. The walls were crooked. There were many cracks," said Tsering Dorje, as he sipped butter tea made with yak's milk in his spruced-up house.

The impoverished mason got help from the group by offering to do all the work himself.

Alexander believes that as Tibet's capital, Lhasa, becomes more modern under Chinese rule, it has become more important than ever to protect Leh's architecture.

"In Lhasa there is not so much left. The government had a very different vision of what Lhasa should be -- very modern," said Alexander who worked in Lhasa before moving to Leh in 2003.

"Leh now has much more than Lhasa."

Tibet-influenced Ladakh shares many cultural similarities with its trans-Himalayan neighbour, which China has ruled since 1951 after sending in troops to "liberate" the region the previous year.

But Leh's Old Town is by and large still ignored by the authorities. Most tourists stay in cheap guesthouses in the new part of town and eat in restaurants there, while the Old Town's unpaved alleys, infrequently cleaned, make it difficult for visitors to get to its temples and monasteries.

It does not yet have running water, though some observers note that with no proper sewage system in place, that is not such a bad thing.

"Definitely we are lacking a policy on that -- I have been always saying that," said Tsewang Rigzin, new tourism councillor for the Ladakh Autonomous Hill Development Council.

"In the last 15 to 20 years there's been very bad planning for Leh. Everything has gone on in a very haphazard manner."

Rigzin hopes the authorities will come up with a plan for the old area, but admits that the council lacks the funds to actually restore anything.

The World Monuments Fund said the authorities could at least do a better job of maintenance, as well as monitoring new construction.

"There are new buildings being built out of concrete and cement next to some of the historic mud-brick buildings. So there's a loss of character going on," fund technical director Mark Weber told AFP from New York.

"These buildings have survived centuries but some of them have not been attended to. Properly maintained, using traditional materials, these buildings can last for centuries more."