KUSHINAGAR, India -- IT IS the world's first statue skyscraper. A 500ft bronze Buddha, the biggest ever built, is set to dominate Uttar Pradesh for 1,000 years. The $250m project has the backing of His Holiness the Dalai Lama, but not local farmers. 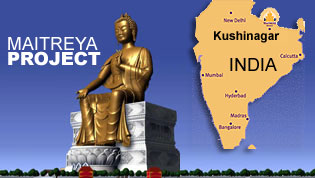 The struggle to construct the statue and surrounding parks and facilities on roughly 700 acres of fertile land is pitting plans by devoted Buddhists against poor villagers who make their living growing rice, sugar cane and wheat on small plots of land that have been in their families for generations.

The farmers are angry, afraid and adamantly opposed to the construction of the giant symbol of love and compassion.

The object of their ire is the Maitreya Project (Maitreya comes from Sanskrit and means loving kindness). It has chosen the fourth-holiest site in Buddhism - where the lord Buddha took his last sip of water, delivered his last sermon, died and was cremated 2,500 years ago - to plant its beacon of compassion and understanding.

"I will cut them if they come here," says Kalami Devi, 40, the demure, bespectacled head of the women's chapter of a local Save Our Land organisation, as she makes a slicing motion across her neck to drive home her point.

P P Upadhyay, a district land acquisition officer, says seven villages and between 15,000 and 20,000 people will be displaced in the process. It is the latest in a series of similar issues across India where rural peasants are clashing with plans by government and industry to develop tourism or industrial projects on a large scale. "On paper the state government has already taken the land," Upadhyay said.

Earlier this year, in the state of West Bengal, where the ruling Communist party was hoping to acquire land for use in a special economic zone, the police were called in and shot local protesting villagers, killing 12 and causing an uproar across the country.

But Linda Gatter, who works with the Maitreya Project's UK office, says it is the government of the state of Uttar Pradesh, not the project organisers, who are energetically pursuing the construction of the Buddha and the development of the area.

"The Maitreya Project has no part whatsoever to play in the acquisition process which is - and which by law can only be - entirely the responsibility of the government of Uttar Pradesh," says Gatter. "The project, which is planned to include significant educational as well as healthcare programmes, will bring extensive benefit to the area and to India."

Manicured parks and 100,000 stupas (small Buddhist devotional structures) will surround the statue. The website of the Maitreya Project describes the eventual construction of a world-class teaching hospital, museum, audio-visual centre, schools, libraries and more. Maitreya Project funds come from private donations as well as through individual or group sponsorship of the Buddha's giant bronze head, left or right hands or legs.

Inside the bronze Buddha, relics and the remains of the original lord Buddha's many disciples that have been collected by the Maitreya Project's spiritual leader, Lama Zopa Rinpoche, will be on display. Those relics are currently on a 150-city world tour, raising money for the structure.

Farmers have accused officials at the Maitreya Project of operating in a clandestine, non-transparent manner, and of trying to force them off their land.

"What is the price of your soul?" asks Ram Prashad Gond, 45, a semi-literate farmer with a wife and six young children to feed. "Our land is our life. We have courage - if we have to die, then we die." Other villagers are engaged in daily fasts to call attention to their struggle.

"All procedures have been done in secret - by force they are stealing our land," says Udaybhan Yadav, a local lawyer and activist.

"There's a 'hear no evil, speak no evil, see no evil' attitude manifest from the upper echelons of the project," says Jessica Falcone, an American anthropologist of Tibetan Buddhism at Cornell University. "The wilful negligence shown by the leadership of the Maitreya Project calls into question the ideological underpinnings of a project that is trying to build a statue symbolising 'loving-kindness.'"

"It's a clash - I think there will be a conflict," says Upadhyay, the local land acquisition officer. He says that if the farmers don't move, the police will be forced to remove them.

But not all area residents predict unhappy days ahead. On the road adjacent to the current Buddhist shrines in Kushinagar, T K Roy, a cafe owner who stands to profit from the increased business, says about half the people in the area are ready to give up their land, while the other half are sceptical and may need to be forcibly removed. "The whole of Kushinagar, Uttar Pradesh and India will benefit, undoubtedly," says Roy. "But, the tranquility of the place will be lost," he says.

Some farmers are holding out for higher compensation packages, but the government cannot pay those farmers a higher rate for their land without paying more to those who have already moved, he says.

"It's the illiterates - they are simply confined to their religious, ancestral principles. Globalisation can benefit poor people too," says Mahesh Sharma, a manager with a local branch of the Punjab National Bank in Kushinagar. "The Buddha left his kingdom; this is all about materialism; now it's become an industry."

The Tian Tan Buddha was completed in 1993 and is one of Hong Kong's most-popular tourist attractions.

It was, up until this year, the world's biggest outdoor bronze Buddha statue standing 112ft high and weighing 250 tons.

However, the Buddha at the Nam Mireuk Temple in Gangjin, South Korea, is 6ft higher than its counterpart in Hong Kong.

In China, the Leshan Giant Buddha, built into the hillside at Mount Lingyun and 233ft high and 92ft wide, is the largest covered stone Buddha in the world.

The Shwe Tha Lyaung statue of a reclining Buddha is situated in Bago, on the north of Yangon, and is the oldest and the biggest Buddha statue in Burma. It was built in 994 AD by King Miga Depa but was allowed to go to rack-and-ruin due to lack of care. However, the statue, which is 180ft long and 52.5ft high, was restored in 1881.