New Delhi, India -- The 17th Karmapa Lama, Ugyen Thrinley Dorje, has arrived in Delhi while on his way to Bodhgaya to attend an annual Buddhist prayer. 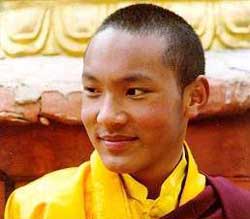 Karmapa will first go to Varanasi and from there he will head for Bodhgaya to attend the 10-day long Molam Puja.

"In Bodhgaya we have annual Puja which is very known as 'Molam Puja.' Basically, Molam in Tibetan means 'aspiration', so, this Molam Puja is considered to be very sacred and it has now become an annual event and ever since His Holiness came to India, he has been taking a special interest for the promotion of this Puja," said Sonam Tsewang, assistant secretary to the Karmapa.

Dorje, one of the highest lamas in Tibet's Buddhist hierarchy, is the only senior monk to be recognised by both Beijing and exiled Tibetan spiritual leader, the Dalai Lama.

Karmapa Lama escaped to India in January 2001 after an arduous 1,400- km (875-mile) journey through the Himalayas.

He is now settled in Dharamsala, and was granted refugee status by the Central Government in 2005.