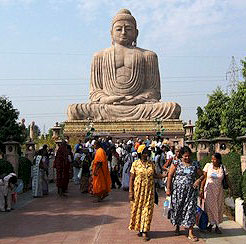 The foundation stone for Lord Buddha statue was placed in 1986.

On November 18, 1989, the statue was inaugurated in Bodh Gaya, a city in Bihar s Gaya District by the Tibetan spiritual leader the Dalai Lama.

A holy flame was also lit on the occasion with the help of sunlight and also with the flames brought from seven various Buddhist pilgrim centres across the world.