McLeod Ganj, India -- At an altitude of almost 2,000 metres, the little hill station of McLeod Ganj huddles in the shadow of the enormous, snow-capped peaks of the Himalayas. But as home of the Dalai Lama and seat of the Tibetan government in exile, it is an important and unusual place. 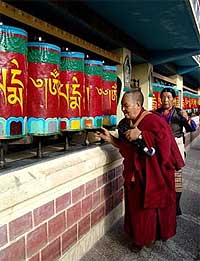 Tenzin Gyatso, the 14th Dalai Lama and Tibet's Buddhist spiritual leader, has lived in McLeod Ganj (also called Upper Dharamsala) since 1959, when he escaped from Chinese-occupied Tibet. Since then, thousands of Tibetan exiles have settled in the town, creating a Tibetan world in India with restaurants and businesses, homes, monasteries, meditation retreats and schools. Everywhere you go, you see people with their Tibetan clothing, smell the Tibetan foods and view the curled-up rooftops of the Tibetan temples, rows of prayer wheels and lines of prayer flags.

"Dharamsala and McLeod Ganj are now more Buddhist Tibetan than Tibet, where the religious traditions and cultural history have been destroyed in the name of the Chinese cultural revolution," says our guide, Vipul Bansal.

"The Tibetans in exile have recreated their traditional way of life in India."

Next door to the Dalai Lama's house is the main Buddhist Temple and monastery. The inner sanctum of the temple is colourfully painted and adorned with thankas, silk wall hangings intricately painted with Buddhist icons. The temple also houses a giant carved and painted image of the Buddha as well as the 100-armed deity Avalokitesvara.

Our arrival coincided with the Dalai Lama giving a public audience. We joined hundreds of red-robed monks and Dalai Lama followers, all rushing to find a spot to sit on the temple floor.

The Dalai Lama was to speak in Tibetan, but the shops along the way sold transistor radios for those who wanted to tune into an English station to hear the instant translation. I picked up a radio and earphones. At the gates, an enterprising family had staked out a spot for a breakfast stand, and was busy selling tea and deep fried Tibetan dumplings and pastries.

Everyone was searched before entering the temple. No cameras or recording devices were allowed. I found a spot with a view through the open windows of the inner sanctum where the Dalai Lama was speaking, but the room only held what looked like a couple of hundred people and there were many more in the outside corridors. The Dalai Lama's message was that a meaningful life revolves around benefitting others.

"Helping others is what we are supposed to do. That's what this life is meant for. It makes sense out of your life and gives meaning to your life," he said with an impish smile.

During the talk, monks would come by with giant tin kettles and fill our cups with soothing Tibetan tea – salty and fortified with melted butter. They also served dry pancake-like Tibetan bread.

Local restaurants have names that reflect the Buddhist – and hippie – influences of the town, such as the Om Restaurant, Café Shambala, Yak Restaurant, Moonview Café and Rising Moon Restaurant.

They serve traditional Tibetan dishes, such as Tibetan thali, a kind of sampler, as well as delicious noodle or Tibetan momo (dumpling) soups.

Below the main temple, a steep road leads to the Tibetan Library of Works and Archives, also a study centre for Buddhism and the Tibetan language. There's also the Kangra Art Museum which has artifacts from the local Kangra valley dating back to the fifth century. The Norbulingka Institute just outside of town was founded to promote and preserve Tibetan culture in exile and promotes the study of traditional arts and literature.

We spent a day visiting the Tibetan Children's Village, established on the outskirts of McLeod Ganj in 1960 by the Dalai Lama's sister, Tsering Dolma Takla, to care for the many orphans and destitute children that result from the continuing Tibet migration.

It provides a Tibetan-style upbringing and education and a family atmosphere – children are placed with foster parents in group homes on the property. Many children grabbed our hands to show us their bedrooms; each one has a clean, neatly made bed, with its own stuffed animal. The school is partially financed by sponsors from around the world who "adopt" individual children.

DHARAMSALA is in the state of Himachal Pradesh, in the Kangra Valley. The nearest airport and railway station are in Kangra,15 kilometres away. There is a daily flight between Kangra and Delhi. It's a 14-hour bus ride from Delhi.

WEBSITES: tibchild.org (Tibetan Children's Village); tibet.com (maintained by the Tibetan government in exile); www.nowrojee.com (a website on Buddhism in India).