Nipponzan Myohoji temple is the oldest Buddhist temple in Mumbai

Mumbai, India -- Mumbai, a place known world over for its film industry and for being the main financial hub of the country, also encompasses a Buddhist temple that has an interesting saga attached to its existence here. 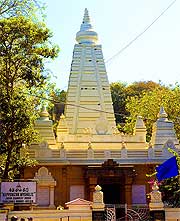 Located in Worli, Nipponzan Myohoji temple is the oldest Buddhist temple of the city and draws many people due to being an ultimate place of tranquillity.

Built in 1956, the Nipponzan Myohoji temple origination is linked to a prophecy made 700 years ago in the 13th century by a monk in Japan called Maha Bodhisattva Nichiren.

He had said that the ultimate salvation of humanity, singed by all that was evil and unpure, lay in the western haven, India, the country which was home to Buddhism.

Centuries later, a Japanese Bhikhu (monk) arrived in India with a mission to fulfil that prophecy.e would take what Undia had to offer and spread it all around the world.

In 1931, the venerable Nichidatsu Fuji started reached the Indian shores with his disciples.

One evening, Jugal Kishore Birla, a great philanthropist and Gandhian, met Fuji Guruji during a prayer session on the banks of Ballygunje lake.

Following their conversation, the decision to build Nipponzan Myohoji temple came into existence. Impressed by Fuji Guruji's world view, Jugal Kishore Birla acquired a plot of land on which the temple of the Nipponzan Myohoniji order was finally built.

Today, the temple is spread over an area of 8,840 square feet enveloped in an overwhelming oriental atmosphere even through the interiors which have been designed along purely traditional lines.

During these sessions, devotees chant na-mu-myo-ho-ren-ge-kyo to the resounding beat of drums. The hall itself stands on 10 pillars carved out of stone. The four walls are lined with vegetable paintings. A series on Buddha's life and times, finely executed with deft strokes.

There is a six-and-a-half feet marble statue of Buddha in sitting posture in a smaller room at the Nipponzan Myohoji temple.