Bodh Gaya, India -- Thousands of Buddhist monks and devotees, many of them from abroad, are participating in a 10-day chanting ceremony for world peace here. 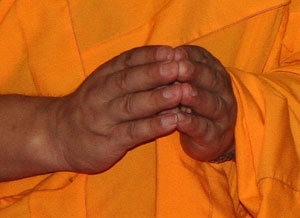 Thousands of Buddhist monks and devotees, many of them from abroad, are participating in a 10-day chanting ceremony for world peace here.

Organised by the Mahabodhi Society of India, the over weeklong festival is being attended by several Buddhist monks from Sri Lanka, Bangladesh, Myanmar, Cambodia, Laos and Thailand.

Thee monks will recite the "Tripitak Sutra Path" under the famous Bodhi tree, where Lord Buddha is said to have attained enlightenment.

"There are seven countries with the Theravada Buddhism, including Thailand, Sri Lanka, Cambodia, Burma, Laos, Bangladesh. All these countries come together once every year to celebrate and propagate the teachings of Buddha," said Bhante P. Sivli Thero, an official of the Mahabodhi Society of India.

Wearing saffron robes of Theravada Buddhism, the monks and nuns participated in procession Tuesday through the streets of Bodh Gaya. Several traditional musical instruments were used in the event.

The monks later congregated at the famous Mahabodhi Temple for the chanting ceremony. They also chanted from the scriptures of the 'Tipitaka', the collected teachings of Lord Buddha written in the Pali language.

Major Bunnag, the Chancellor of the Dhamma Society of Thailand, said: "Last year, the royal matriarch of Thailand, Princess Galyani, graciously presented the World Tipitaka edition in Roman Script, which is here in 40 volumes. The Mahobodhi Society of India, is the first institution in India this royal gift."