Dalai Lama says wants time for preparation of 'next life'

NEW DELHI, India -- Tibetan spiritual icon the Dalai Lama on Saturday said he wanted more time "for preparation of my next life" and looked forward to the day he could hand over his political role to younger leaders. 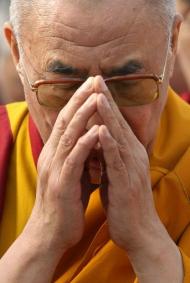 << The Dalai Lama said he would like young, qualified leaders to take over his role

The 72-year-old Buddhist leader has previously said he would retire completely within a few years.

"It is possible within the next some time I may resign fully, voluntarily, happily," the Buddhist leader told a news conference in New Delhi, but gave no time frame.

"I am already in a semi-retired position," he said.

The Tibetan leader said he should "devote more time for preparation of my next life."

The Nobel Laureate, who won the Peace Prize in 1989 for leading a non-violent struggle for the liberation of his homeland, said he would like young, qualified leaders to take over from him.

"I have no worries," he said, referring to the next generation of leadership.

The Dalai Lama, who maintains a hectic work, prayer and travel schedule and rises before dawn each day, has lived in the northern Indian town of Dharamshala since fleeing Tibet after a failed uprising against Chinese rule in 1959.

China has ruled Tibet since sending troops in to "liberate" the region in 1951 and has violently suppressed a number of uprisings since then.

The Dalai Lama's office has previously said that the leader would like the elected Tibetan parliament-in-exile based in India to play a greater political role, so that his work could be reduced.