Chennai, India -- Vesak the holiest day in Buddhism celebrated for the birth, Enlightenment, and the death of Lord Buddha. This holiest day was celebrated in Chennai at the Deputy High Commission for Sri Lanka in Chennai, Tamil Nadu. 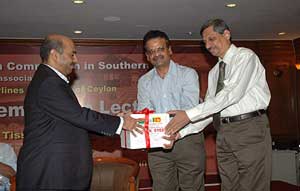 The Deputy High Commission for Sri Lanka in Southern India observed Vesak festival this year by organising the 6th Vesak Commemorative Lecture on 17th May 2008. Vesak, which is an important day in the Buddhist calendar, was declared as a day of observance by the UN.

Apart from the annual Vesak lecture, the other events on this important festival are colourful illuminations at the Chancery premises which is also decorated with Vesak lanterns, and a ‘perehara’ (procession) which will be held in coordination with the Mahabodhi Society in Chennai on Sunday the 18th May 2008.Prof. Tissa Kariyawasam, delivered the 6th Vesak Commemorative lecture at the Hotel Accord Metropolitan, Chennai on the “Influence of Southern Indian Religious Practices on Buddhism in Sri Lanka”.

As Sri Lanka is a multi-religious, multi-ethnic society where major religions such as Buddhism, Hinduism, Islam and Christianity are given their pride of place, the Sri Lanka Deputy High Commission, in keeping with the vision of Mahinda Rajapaksa, President of Sri Lanka, has been since 2007, observing and celebrating all major religious functions which are celebrated in Sri Lanka.

In keeping with this vision, the 6th Vesak Commemorative Lecture this year featured an eminent academic and prolific writer, Prof. Tissa Kariyawasam, the former Dean of the Faculty of Arts, University of Sri Jayewardenepura, Sri Lanka who delivered a lecture at the Hotel Accord Metropolitan, Chennai on the “Influence of Southern Indian Religious Practices on Buddhism in Sri Lanka”.Mr. P.M. Amza, Deputy High Commissioner is seen donating three eyes which can be used for cornea transplant to Rotarian N. Venkataraman, President, the Rotary Club of Madras Northwest and Dr. N. Krishnan of Frontline Eye Hospital.

Prof. Kariyawasam has a distinguished career spanning 43 years and has many numerous publications to his credit.

The speaker, apart from showcasing a number of practices followed by the Buddhist Society in Sri Lanka as a result of the influence of the South Indian Religious Practices also highlighted the recent research endeavours to establish the relations between three local inhabitant groups in Sri Lanka namely, Veddhas, Nagas and Yakkas with that of the corresponding south Indian groups in relation to aspects such as features, religious beliefs, social organizations, habits and customs.

Mr. S. Muthiah, Editor, Madras Musings and chronicler of Chennai who presided over the lecture, is also an eminent personality. He was educated in Sri Lanka, India and the U.S. and worked with The Times of Ceylon as its Foreign News Editor, then Features Editor. Mr. Muthiah, in his address, mentioned that the relations between Sri Lanka and South India could be viewed in many spheres such as linguistics, religious, social, political, historical etc.

The lecture was followed by a cultural performance by the students of Isipathana Maha Vidyalaya, Colombo.Cultural Performance

As a part of the observances, the Deputy High Commission in association with the Eye Donation Society of Sri Lanka organised the donation of three eyes which can be used for cornea transplant. Rotarian N. Venkataraman, President, the Rotary Club of Madras Northwest and Dr. N. Krishnan of Frontline Eye Hospital received the eyes from Mr. P.M. Amza, Deputy High Commissioner. Dr. N. Krishnan offered to do the cornea transplantation to the needy recipients free of charge.