Assam, India -- Hundreds of Buddhist villagers in Assam performed a unique funeral ritual for more than 800 endangered storks that perished last week after a 200-year-old banyan tree in which the birds were nesting fell. 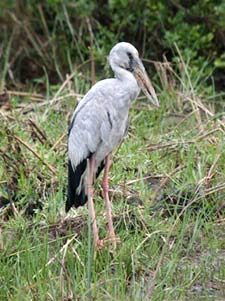 The Asian openbill storks died after the banyan tree that served as their colony crashed on September 15 into an adjacent pond inside a Buddhist monastery at village Banglung in Karbi Anglong district, about 310 km east of Assam's main city Guwahati.

Locals, most of them farmers, considered the banyan tree sacred and believed the storks were their guardian angels.

"Five monks led the special funeral prayers at the monastery Sunday as the incident of the banyan tree crashing and the subsequent deaths of so many storks is considered a bad omen," said Dibyadhar Shyam, a forest ranger and a Buddhist resident of the village.

The prayers continued for about two hours, with monks chanting hymns and performing special rites to ward off any evil following the incident. The banyan tree was home to about 1,500 storks of the species listed as endangered under the Indian Wildlife Protection Act.

Flamingos thrive best - in the filth of India!

"Probably the tree was unable to bear the weight of the birds and hence crashed," Shyam said. The Asian openbill stork is a broad-winged soaring bird and breeds near inland wetlands and builds stick nests in trees. It walks slowly and steadily on the ground, feeding on frogs and large insects.

It is a resident breeder in tropical southern Asia from India and Sri Lanka to Southeast Asia. The Banglung village had one of the largest colonies of the storks in Assam after the famed Kaziranga National Park.

Wildlife experts and ornithologists have hailed the villagers for their concern for the endangered storks.

"The way the villagers responded to the deaths of the storks by informing the wildlife authorities and the concern for the birds is indeed a heartening thing at a time when people are less worried about protecting endangered species," said A Goswami, a wildlife warden who participated at the special prayers at the monastery.