Dharamshala, India -- “Ni Hao”, (Ch: How are you?) said the Dalai Lama to a group of around 600 Taiwanese Buddhists who had gathered at the courtyard of the Thekchen Choeling Tsukhlakhang to listen to his teachings. 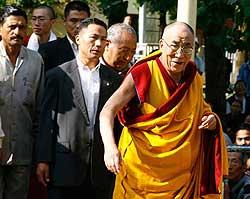 The 5-day teaching on Arya Nagarjuna's Commentary on Bodhicitta (jangchup semdrel) and Kamalashila's the Middling Stages of Meditation (gomrim barpa)is requested and facilitated by a Taiwanese Buddhist group.

Speaking in Tibetan through a Chinese translator, the Tibetan Buddhist leader said that he has always wanted to benefit his dharma friends in Taiwan through religious teachings and that he initially had plans to make frequent visits to the Island. However, since the revival of contacts with China in 2002, it has become difficult for him to visit Taiwan. The Tibetan leader said that he will pray for a visit to Taiwan and asked the Taiwanese followers also to do the same.

The Dalai Lama said that Buddhists must investigate the Buddha’s teachings before practicing it. “You must understand the meanings of the prayers you say, otherwise it is like saying ‘dry words’.”

This is the third religious event that the Tibetan leader took part in after his return from Mumbai where he was treated for exhaustion. His October visit to Europe was cancelled as doctors advised him to take ‘good rest’. The teaching duration for a day is cut short to 2 sessions of one hour thirty minutes with two hours recess between sessions.