Taking a leap of faith

New Delhi, India -- He was born a Hindu. But despite belonging to an educated family, Bhavan Nath Paswan had to live a life of shame and ridicule. He was a chamar, lowest of the low according to the Hindu caste system. Paswan remembers the years of suffering. 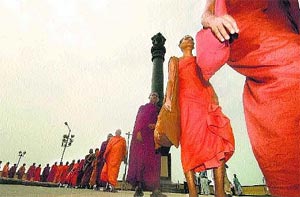 << Across India, lakhs of Dalits have found social salvation in the way of the Buddha

‘‘I suffered discrimination at all levels. From high school to college and beyond, it was a life without any dignity. Like the rest of my family, I resigned myself to the fact that the misdoings of my previous birth had made me a chamar in this life and there was nothing I could do to change that.’’

Paswan finally rejected the cruel fatalism of a caste system that allowed for no movement, and certainly not upwards, when he arrived at his job at the Indian postal department and was taunted by colleagues.

‘‘These days even chamars come to work well dressed,” Paswan’s colleagues teased. The dignified middle-aged man snapped. “It was about that time that I heard of conversion to Buddhism and I knew I had to follow that path to lead a life of dignity.’’

Paswan converted to Buddhism five years ago. At a ceremony in Delhi, he took the Buddhist name Gopi Raj. He was 41. In a leap of faith and a quest for personal freedom, he found a different path to the dignity he so desperately wanted.

Today, Paswan greets people with the words ‘namo buddhaye’ rather than ‘namaste’. In Buddhism, Paswan says he found the acceptance Hinduism had always denied him. ‘‘Just this afternoon, we were giving somebody a send-off at work. The gentleman was gifted a statue of Buddha and I was asked to present it to him. Buddhism has given me the respectability and acceptance that Hinduism denied me,” he says, on phone from Lucknow.

He is just one of an estimated 75 lakh Dalits who have abandoned Hinduism and converted to Buddhism since 1956, says Udit Raj, chairman of the All India Confederation of SC/ST Organizations. ‘‘Buddhist philosophy doesn’t condone rebirth. It abhors superstition and doesn’t believe in the stratification of society. It treats everybody equally,’’ adds Raj.

The new Buddhists revel in their spiritual freedom from man-made constraint. Raj says that most of the new converts ‘‘become self-starters, independent and competitive”.

He says their quest for a faith that respects personal freedom and individual choice means “they grow intellectually. Their wives and children enjoy higher status in the family and society. They have become enlightened and are saved from religious exploitation and bigotry.’’

Up and down the country, Dalits are increasingly seeking social salvation through a more egalitarian faith. In disparate parts of rural India, they are embracing Buddhism in droves. Many merely drop the surnames that mark them out forever as low-caste Hindus; others take on new ones, such as Gautam, Maurya, Shakya and even Ambedkar.

In another India — upper class and upwardly mobile — Buddhism is not a religion but a way of life. Lawyer Mandeep Singh says he found refuge in the Karma Kagyu school of Himalayan Buddhism because he liked the idea of being responsible for his own actions.

‘‘Here, there is no concept of destiny other than the one you make for yourself. And that little teaching has changed my life entirely. From being in victim-mode, I’m now in control. The practice has taught me how to see myself as the cause rather than the effect,’’ he says.

Naveena Reddy is director general of Bharat Soka Gakkai (BSG), the Indian affiliate of a global association of grassroots organisations that seeks to promote peace and respect for all people drawing inspiration from the philosophy of a 13th century Japanese Buddhist Nichiren Daishonin.

Reddy says Buddhism in India tries “to apply Buddhist philosophy to create value in our daily life and in society.” BSG has 38,000 members, a small number for an organization that claims 12 million people in 190 countries. But Reddy says BSG teaches its members “to awaken the limitless potential that all life possesses”. Crucially, it teaches that one has “to change oneself to change the environment”.

There are many variations of Hindu-Buddhism. There are the ‘HiBu’, described by Mahabodhi Society patron B K Modi as “Hindu-Buddhists, or Indians who are born into Hinduism but make a choice to live life the Buddhist way”.

Modi says Buddhism is especially attractive because “there is no caste, there is no God or symbols of God either. The practice teaches you there are no angels or devils on the outside — it is just the good or bad within you.’’

But the Mahabodhi Society doesn’t encourage conversion, just the melding of faiths. Modi argues, ‘‘Why should you denounce one faith when you can easily embrace two?’’

For many, however, Buddhism is almost a fad. Blissfully unaware of all that goes into becoming a true follower of the Enlightened One, a young internet-user updates his online status on a popular networking website. “Zen forever,” it says.