Mumbai, India -- The Dalai Lama underwent a second medical checkup in as many months Tuesday and doctors cleared him to resume foreign travel, said a spokesman for the exiled Tibetan spiritual leader. 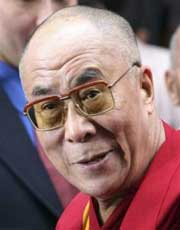 The 73-year-old Dalai Lama was admitted to a Mumbai hospital in August and underwent tests for abdominal discomfort. Doctors advised him to cancel a planned trip to Europe and rest, saying he was suffering from exhaustion.

"Everything is fine," said Tenzin Taklha, the Dalai Lama's official spokesman, after the checkup in a New Delhi hospital. "There was no abdominal discomfort this time. This was a follow-up check."

The Dalai Lama arrived in the Indian capital on Monday from Dharmsala, a north Indian hill town where he set up his headquarters after fleeing Tibet in 1959 following a failed uprising against Chinese rule.

The Dalai Lama normally spends several months a year traveling the world to teach Buddhism and highlight the Tibetans' struggle for greater freedom in China. He was to have visited Italy, Switzerland, the Czech Republic and Germany in October.

After a March outbreak of violence in Tibet, China stepped up its campaign to vilify the Dalai Lama, blaming him for the unrest, which Beijing says was part of a campaign to split the Himalayan region from the rest of China.

The Dalai Lama has denied the allegations, saying he is only seeking greater autonomy for Tibet to protect its unique Buddhist culture.