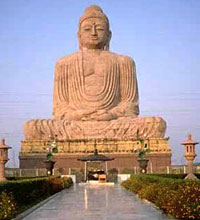 ‘We are not benefiting from India’s policy of inclusive growth. Buddhists continue to remain on the margins and have to slog on their own to keep life going against all odds,’ Zotpa told IANS in an interview.

‘The government has not met even a single important demand of the Buddhist community. It is, perhaps, because we are peace loving people and do not matter numerically in the country’s electoral politics,’ Zotpa said.

According to him, the community’s key demands were setting up a Lord Buddha Foundation, an International Buddhist University, special funding for monastery education, and inclusion of the Bhoti language in the 8th Schedule of the Indian Constitution.

Bhoti is many Buddhists’ mother tongue and they get initial education in monasteries in this ancient language. Since the language is not constitutionally recognised, aspirants for government jobs have to write their examinations in one of the 15 languages listed in the 8th Schedule.

‘This is proving to be a major handicap for poor Buddhists, who receive basic education in Bhoti, and fail to learn English or Hindi for want of proper facilities in monasteries,’ Zotpa pointed out.

The idea behind the Lord Buddha Foundation and an International Buddhist University is to spread the teachings of the Buddha - who was born in India - provide scholarships to students pursuing Buddhism for higher studies, and promoting the pious words of the Buddha by attracting students from across the world.

‘There is the Maulana Azad Education Foundation to promote education among backward Muslims and the Jagjivan Ram Foundation for the Scheduled Castes students, but nothing for us,’ Zotpa pointed out.

He said an international university would get students from several countries whose citizens throng India annually to visit places like Bodha Gaya, Rajgir, Sarnath and Kushinagar that are associated with the Buddha.

What also makes Zotpa angry is the government’s nonchalance in handing over the management of the Bodh Gaya temple in Bihar to Buddhists. Hindus currently hold the key posts in the temple’s management.

‘I cannot imagine why the genuine demands of the Buddhist community are not being met when the present government talks of inclusive growth,’ he said, adding: ‘Since 2006, the government has withdrawn the Rs.15 lakh (Rs.1.5 million) annual grant to organise a Buddha Mahotasva (festival).’

‘Lord Buddha is our only hope,’ he said, pointing out that the Buddha preached truth and non-violence to the world several hundred years before the arrival of Jesus Christ.

India’s minority affairs ministry, which came into being in January 2006, has been allocated Rs.10 billion to create ‘productive assets’ for the minorities, who account for 18.4 percent of the country’s one billion plus population.

Commented a ministry official: ‘All schemes are open for the minorities and there is no discrimination against any community. Efforts are on to make people aware of the ministry’s various schemes.

‘So far as the specific demands, including setting up the Buddha Foundation, are concerned, the ministry is doing the needful. It will take some time before something concrete comes about,’ the official, requesting anonymity, said, without specifying details.