Zanskar, India -- Indigenous peoples are similar to our globe's flora and fauna in one key way - many of them also face extinction. The systematic suppression of Tibetan people and culture by the Chinese government has been well documented. 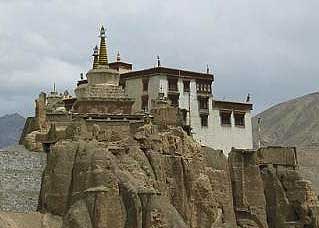 << A gompa (monastery) in Zanskar, India

What is much less well known is that indigenous Tibetan-related cultures are struggling to survive in homelands outside of Tibet. Global economic forces can invade and devour these fragile social systems if they’re not sustainably managed.

Zanskar is one. A remote region in extreme northwest India, historically Zanskar was considered part of Tibet. The Indian government considered the area impossible to administer, officially "closing" it to the outside world until 1974. Cut off from the Tibetan motherland by the Chinese, the Zanskaris found themselves in the Muslim dominated state of Jammu and Kashmir along with their better known Tibetan brethren to the east in the region of Ladakh.

In the epicenter of central Asian geo-political volatility, Zanskaris are mere miles from Pakistan, Afghanistan, and the sealed Tibetan border. The only road leading into the 12,000 feet high Zanskar valley is controlled by the northern town of Kargil – site of the most recent India/Pakistan battle. The best traveled "highway" out of Zanskar is a trail leading over the 17,500 foot Shinku Pass. Most people walk for 7-8 days to reach Darcha and points beyond in the neighboring Hindu dominated state of Himachal Pradesh. Locals still refer to leaving Zanskar for points south as "going to India."

In a situation reminiscent of the "education" of Native Americans in this country, in their public schools Zanskaris have been taught Urdu, Hindi, and English - not their own language, not their own history, not their own culture. Against these odds the culture has still remained largely intact to date. In a sense, Zanskaris very remoteness has protected their culture from extinction.

All that may soon change. The Indian government is building a new road from Leh, the capital of Ladakh, to Padum, the capital of Zanskar. A trip that used to take up to 2 days and be impassable for seven or more months of winter will soon take 3-5 hours and be open year round. Along with infrastructure benefits like medical care, communications, and technology, global economic reach will also bring the proverbial, if not literal, Walmarts, McDonald's, and Coke. Children already consume an exclusive diet of Hindi and Urdu music, television, and movies. Tibetan is not an officially recognized language of the Indian government. The rich culture in the area known as "Little Tibet" may not survive.

Many are doing their part, racing against the clock. The Dalai Lama has spoken out about the importance of protecting these remaining Tibetan cultures. Helena Norberg Hodge has advocated tirelessly for these people with her book ANCIENT FUTURES and the NGO ISEC. Two monks from Stongde village have promised the Dalai Lama they will do whatever they can in Zanskar They have built a school in the 1,000 year old Stongde monastery. When complete, the curriculum will combine the best of modern Western education with Tibetan Buddhism.

The monks are also building a museum to house their relics dating back 8,000 years and a guesthouse to accommodate tourists. In addition, they recently brought 17 children from poor families in surrounding villages to other Tibetan schools and monasteries in "India." A film crew went with them and documented their journey.

What can we do? Encourage responsible investment in Zanskar: businesses that grow the fragile culture alongside profits, that protect the high desert ecosystem by adding useable water not reducing it. Support the monks’ efforts to maintain monasteries, to build schools and provide free education. Encourage the region's few private schools a) to lower tuition so more can afford it, and b) to teach Tibetan language, culture, and history. Get the Indian government to officially recognize and protect the language.

What we can do may be as simple as not offering locals money when they graciously offer tea and barley wine to visitors on treks. Respect the beautiful abundant generosity of the culture and just say thank you. Or better yet, "Julay!"

Frederick Marx is an internationally acclaimed, Oscar and Emmy nominated producer/director with 25 years in the film business. He was named a Chicago Tribune Artist of the Year for 1994, a 1995 Guggenheim Fellow, and a recipient of a Robert F. Kennedy Special Achievement Award. His film HOOP DREAMS played in hundreds of theatres nationwide after winning the Audience Award at the Sundance Film Festival and was the first documentary ever chosen to close the New York Film Festival. He is the producer and director of the documentary 17 Paths to Enlightenment.