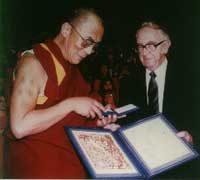 Hundreds of Tibetan monks, nuns and students including some foreigners assembled in the main Buddhist premises at McLeodganj to celebrate the occasion.

Thubten Samphel, spokesperson of Tibetan government-in-exile said that conferment of the Nobel peace prize on Dalai Lama showed the international support for the cause of Tibetan freedom.

“The Conferment of the Nobel peace prize on Dalai Lama has shown international support for the peaceful cause of the Tibetans people for greater freedom in Tibet,” said Samphel.

The Dalai Lama was conferred the Nobel peace prize in 1989 for his non-violent efforts to free Tibet from Chinese rule.

Tibetans revere the Dalai Lama, 73, inside and outside the Himalayan region despite repeated Chinese campaigns to stamp out their loyalty to him.

The Buddhist spiritual leader set up his seat of power in Dharamsala after he and his followers fled to India in 1959, nine years after China occupied Tibet.

The Dalai Lama has renounced the goal of an independent Tibet and says he only wants more autonomy. China accuses the Dalai Lama with continuing to spark separatist efforts for the 2.7 million Tibetans and refuses to allow him back inside its borders.

On the web: The Dalai Lama's acceptance speech of the Nobel Peace Prize
http://www.tibet.com/DL/nobelaccept.html