Gulbarga is emerging as a major Buddhist centre in South India. The Buddha Vihar will be a new feather in Gulbarga's capGulbarga, India -- Gulbarga is all set to emerge as a major Buddhist pilgrim centre in South India. The Buddha Vihar of Siddarth Vihar Trust will be formally inaugurated by the President of India tomorrow (January 7) and the Dalai Lama, the spiritual leader of Tibet, is scheduled to participate in the rituals on January 19. 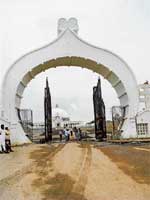 Located six kilometres away from Gulbarga, adjacent to the Gulbarga University campus, the Buddha Vihar complex has been constructed in conformity with traditional Buddhist architecture. The imposing domed structure on elevated ground reminds one of the Taj Mahal.

But there are basic differences between the two. While the Taj is a white marble wonder, the Vihar’s dome is an RCC structure covered with Italian white marble chips. The Vihar blends the best of the architectural features of Buddhist centres of Sanchi, Saranath, Ajanta and Nagpur.

The construction of the Vihar, originally a small one, began in 2002. The Trust changed the blueprint to make it a huge complex making it one the best Vihars in the South.

Spread across 18 acres, it can be divided into the main building which has a meditation centre at the cellar and a Lord Buddha chaitya (temple in Pali) on the ground floor. The dome is 70 ft in height and 59 ft in diameter.

Besides, it has 48-ft tall four Ashoka pillars in the corners of the main building. It has an attractive Sankalpa stupa, 26 ft in length and 30 ft in diameter.

The other attractions are 100x100 ft open-air theatre with a 2,500-seat capacity, four large Mahadwaras (arches) known as Sanchi gates and a group of 11 cement statues led by a bronze statue of Dr B R Ambedkar indicating the Dhamma Kranti Yatra of 1956. Another feature is the U-shaped Dhamma complex housing a dormitory, a library, study centre, kitchen, dining hall, conference hall, exhibition hall and guest rooms. The Dhyana Mandir (meditation hall) in the main complex draws attention. It has a 6.5 ft tall black granite Buddha statue made in Bidadi by famous sculptor Ashok Gudigar. It is bliss to see the smiling face of Buddha while listening to the chanting of the mantra Buddham Sharanam Gacchami (I take refuge in the supreme knowledge).

The prayer hall is 15,625 sq ft with 170 pillars and 284 blocks. Each block has a carving representing the architecture of Buddha temples of Ajanta, Ellora, Nagpur, Bodh Gaya, Saranath, Rajgir, Lumbini, Kusinara, Thailand, Singapur, Sri Lanka, Tibet, Japan and Rome. The marbled floor of the hall has a seating capacity of 1500. There are 28 huge ventilators named after Buddhas of various eras.

The main attraction in the complex is a gold coated 8.5 ft tall panchaloha statue of the seated Buddha. This is supposed to be the tallest Buddha statue in the South. Imported from Thailand, it was consecrated in September last year. Statues of Buddha’s disciples Ananda and Kashyapara are also part of the complex. The hall has a seating capacity of 500. The walls have cement carvings depicting the jataka tales, Tipitaka and Buddha charite.

There are three huge arch-shaped entrances to the basement and the ground floors. In the corridors of the ground floor there are cement statues of Buddha. The entrance door is made of rosewood. The dome is 75 ft from the ground and has a 10-ft-tall panchaloha kalasha.

The white arch is in the shape of a peepal leaf (Bodhi tree) which symbolizes enlightenment. A beautiful landscaped garden stretches from the Mahadwara to the temple.

This is divided into three stages representing the Buddha’s three basic natures of world. The first stage is Anichcha Lakkana (unstable), the second Dukka Lakkana (sorrow) and the third Anantha Lakkana (without soul or ego). The first stage indicates that nothing is permanent in this world. The past is symbolised in the form of the stupa, the theatre complex indicates the present and the Ambedkar statue symbolizes the future.

In keeping with the principle that a Vihar should essentially have a peepal tree, a sapling has been planted and one more may come from Bodh Gaya.

Rudraiah points out that he was put on the job when he was executive engineer in Yadgir in 2002. “I studied books on Buddhism before taking up work. I visited famous Buddha temples across India, Malaysia, Singapore and Thailand to study the structural aspects,” he says.

Work remains to be done at the Vihar. Public toilets have to be constructed; provisions for rainwater harvesting and solar lighting have to be made.

The building has no ramps for people in wheel-chairs to go around. A lot more greenery needs to be added around the Vihar too.

The Buddha’s tryst with Karnataka

Gulbarga offers a rich history of the earliest Buddhist settlement of Satavahana period, the beginning of the Christian era. One of the ancient sites here is in Kanaganahalli near Sannati, a famous Buddhist heritage site on the banks of river Bhima in Chitapur taluk.

The remains of stupas, major rock edicts of King Ashoka, mounds, slab inscriptions and statues are all found scattered in a small area within the revenue limits of Kanaganahalli. About five to six stupa remains are found in and around Sannati.

Sculptures of Ashoka and his queen flanked by female attendants are found near the stupa in Kanaganahalli.

Ashoka’s name is inscribed on it. Ashoka’s inscriptions are also found in Chandrala Parameshwari temple in Sannati. It formed the base to the idol of Parameshwari, and was found while renovating the temple. Buddhist jataka stories are inscribed on stones around the stupas. Literary accounts indicate that Ashoka sent missonaries to propagate Dhamma, the truth taught by Buddha. The images of Adi Buddhas are found near the stupa at Kanaganahalli. “This is the biggest and earliest Buddhist site in inscriptional material, sculptures and stupa remains in Karnataka,” says Shadaksharaiah. The construction of the stupa in Karnataka began from Gulbarga but over the last 1,700 to 1,800 years, the tradition was stopped. But the construction of Buddhist monuments like viharas and chaityas continued up to 12th century AD in Karnataka. There are a many Buddha temples, monasteries and Viharas in Karnataka.

But Bangalore’s Mahabodhi Society has a special place. It is a charitable organisation set up in 1956 by Acharya Buddharakkhita and is engaged in rendering spiritual and humanitarian services. It has established monasteries, hospitals, meditation centres and publishes Dhamma books and magazines. It is also a Bikku training centre. As many as 120 Bhanteji (monks) are being trained here.

The society celebrated its golden jubilee in 2006.

It is in the process of constructing a Buddhist Open University in Bangalore. Spread over two acres of land at Gandhingar in the heart of Bangalore, it has a beautiful statue of Buddha, a stupa and a Bodhi tree, which was planted in 1956. The Society has brought out Kannada version of Pali Tipitaka (pure teachings of Buddha) in 13 volumes. Acharya Buddharakkhita, the man behind building the Society, is now 87 and leads a life of solitude.

It is largely to senior Congress leader from Gulbarga Mallikarjun Kharge’s credit that the development of  the Vihar started. He is the chairman of the Siddarth Vihar Trust established a decade ago.

Though a Buddha disciple, Kharge had not conceived a Buddhist temple on such a large scale. He just wanted to construct a stupa. But over the years, the project kept growing.

Why did he build the Vihar when Sannati is already there?

“Sannati is 80 km from Gulbarga and is under the Archaeology Department. Gulbarga and Bidar districts have several Ambedkar followers. They go to Mumbai and stand in queues to pay their respects at the Ambedkar samadhi on December 6 every year. On Vijayadashami, lakhs of people visit Nagpur’s Deeksha Maidan. Many people suggested that Gulbarga should have a Buddha temple.”

He says the Vihar “should grow as a research and cultural centre. Many Ambedkar followers have no idea about the cultural aspects taught by Ambedkar.”

The state has the second highest population of Buddhists in India after Maharashtra. According to the 2001 census, there were 3.9 lakh Buddhists in the state, while it was 70,000 as per the 1991 census and 42,251 in 1981. There are more Buddhists in Bidar and Gulbarga districts. Heggade says the Gulbarga Vihar should offer normal education as well as Buddhist philosophy to students. Its faculty should include Pali, Dhamma and Tipitaka scholars, he adds.