Dharamsala, India -- Fostering an already existing academic cooperation into a fuller collaboration, a Miami University, Ohio USA), today signed a Memorandum of Understanding (MoU) with the Institute of Buddhist Dialectics, a premier Tibetan learning centre based in Dharamsala, the seat of the Tibetan Government-in-exile. 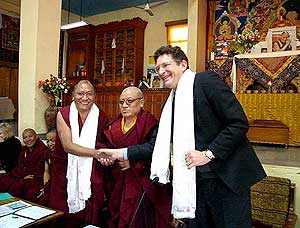 The signing of the agreement will help forge a closer partnership between the two academic institutions in the field of higher education and scholarly interactions, and will open new phase of exchange programs for their students.

The MOU was signed at ceremonial function this morning here at the College for Higher Tibetan Studies, Sarah, which is a branch college under IBD.

According to Geshe Kelsang, the signing of the agreement establishes academic affiliation in the specific fields of academic exchanges. That means performance of the Miami students in their studies during the exchange period in Dharamsala will be recognized as an equivalent to that of Miami University.

Accordingly, Ven Kelsang says, Miami University has agreed to support and accept Tibetan students to pursue relevant further studies and, create access to its intellectual traditions and academic disciplines in its campuses.

Stressing on the need to create more such outreach exchange programs, Ven Kelsang, in his welcome speech, described the establishment of academic partnership and collaboration as an effective way to “collectively produce educated and responsible persons for peace and harmony in the world.”

In signing the agreement, Mr Jeffery said, “On behalf of 8000 faculty members and 21000 students of the Miami University, we are deeply honored to forge this historic partnership at the start of the year.”

“It will help our students to understand Tibetan Buddhist philosophy, Tibetan society and culture that cannot be learned anywhere in the world,” he added, describing the outreach exchange program as an important part of his university's “effort to teach our students of the world outside of the United States” and “commitment to reach out to the entire world.”

Dr Ackers described the forging of the MOU as the “culmination of the four years of co-operation between the Miami University and Institute of Buddhist Dialectics.”

Since 2003, IBD and CHTS have been accepting students from Miami University under the Miami Summerfield School outreach program. The program allows students from the university to visit Dharamsala to learn about Tibetan culture, Buddhism and philosophy as well as gain an understanding of a community in exile and issues associated with Tibetan refugees.

Commenting on the successful signing of the MOU between IBD and Miami University; Tibetan religious and cultural minister Ven Tsering Phuntsok expressed hope that collaboration in educational exchange programs would contribute significantly to the understanding and preservation of the rich Tibetan cultural heritage, which he said is now under great danger of facing annihilation under the Chinese rule.

The Miami delegates on Wednesday met with the exiled Tibetan leader His Holiness the Dalai Lama, who has for a long time encouraged and supported interchanges between scholars in both western and Tibetan tradition in an effort to forge links for trans-cultural understanding and the synthesis of knowledge.