Sarnath, India -- Exiled Tibetan leader His Holiness the Dalai Lama was offered a grand Tenshug (Long-Life ceremonial offering) by the Tibetan Youth Congress, the largest pro-independence group in the exile Tibetan community, to reaffirm its absolute faith and respect in his leadership. 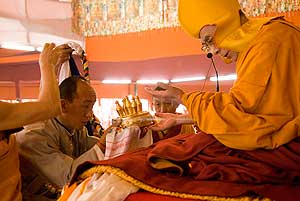 The Chief Minister of the North eastern Indian state of Arunachal Pradesh Dorjee Khandu was among the dignitaries present during the prayer ceremony to wish the exiled Tibetan leader a long and healthy life.

“Tibetan Youth Congress offered this Tenshug ceremony, which is a long life offering to His Holiness the Dalai Lama to reaffirm our respect, our love and faith in his leadership and to request him to continue to lead the Tibetan struggle,” the organization president Mr Tsewang Rigzin told Phayul.

“In doing so we pay our tribute and gratitude to His Holiness’ long and able leadership to the Tibetan people’s cause,” Tsewang said.

The Tibetan Youth Congress, which claims some 30,000 active members under its worldwide regional chapters, however, does not support the Dalai Lama’s Middle-Way policy that seeks “real and meaningful autonomy” instead of outright independence for Tibet.

China, which sent military troops in late 1949 to occupy Tibet, has lately tried to denounce the Tibetan pro-independence group by condemning it as as a "violent terrorist" outfits and equating them with Al-Qaeda.

The youth organisation refutes the allegations as “baseless” saying it is a non-governmental organization with "non-violence and peace" as its founding principles.

The organisation last week released a book - "RESPONSE: Response to the Allegations of the Communist Party of China" - to counter Chinese allegations. The Organisation Vice President Dhondup Dorjee Shokda said that the book would reveal the series of attempts made by the Chinese government to malign the Tibetan People's peaceful movement and counter the numerous unfounded allegations made by the Chinese Communist Party.

“However, there would be no change in the Tibetan Youth Congress’ founding goal. It will remain committed in its stand of seeking complete independence for Tibet,” he added.

According to him some 175 representatives of the organization, including the central executive members, representing its worldwide regional chapters took part in the Tenshug ceremony, which involved offering prayers and auspicious Buddhist objects to wish the Tibetan leader a long and healthy life.

The ceremonial long-life offering was made at the end of a week-long teaching by the Dalai Lama at the central Institute of Higher Tibetan Studies at Sarnath, in the northern Indian city of Varanasi.

More than 20,000 Buddhists from across the globe attended the teachings, which ended yesterday.

The Nobel peace laureate yesterday, shortly after the teachings, led a massive prayer for world peace on the premise of the Sarnath’s Damek Stupa, where Lord Buddha is believed to have delivered his first sermon after attaining enlightenment about 2500 years ago. Thousands of Tibetans and Buddhists from across the world offered prayers at one of the most sacred Buddhist pilgrimage sites for the victims of Tibet unrest, Sichuan Earthquake, Bihar floods and recent Mumbai Terror attacks.
TOP