Ladakh - Most Neglected Region of Jammu and Kashmir

Ladakh, India -- Kashmir used to attract national and international attention. After all the state was known by this name and during the entire debate over the future of the state, it was called the Kashmir problem. 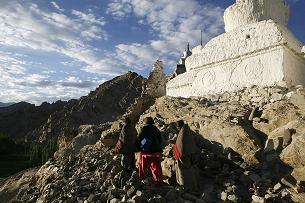 Jammu asserted its right to be noticed and succeeded to a large extent through its 62 days long unprecedented massive protest in July-August last ostensibly over the issue of land allotment to the Amarnath Shrine Board.

Kashmir valley had always attracted national and international attention, for obvious reasons and Jammu also mainged to be in the media highlights during two month agitation on Amarnath Land row.

But the third region of the state namely Ladakh and its problems are still not known and discussed even—outside the region within the state.

In fact the constitution of the state does not recognize the region unlike Jammu and Kashmir. It was been treated as a district of Kashmir division and administered from Srinagar, from which it remains cut off for more than half of a year.

The district was further divided in two parts on religious lines viz Buddhist majority Leh and Muslim majority Kargil. As common administrative links were snapped, the composite and secular character of he region was seriously damaged. Three years ago it witnessed first communal riots. Not long ago the communal divide was so blurred that inter-faith marriages were not unknown.

Ladakh region with an area of 96,701 square kilometers is more than the combined area of the rest of the undivided state. This trans Himalayan region, inhabited by Tibetan, Mangolian and Dardic races, was conquered by Dogra army and made part of the J&K state and India in mid nineteenth century. But it never reconciled to the loss of its independence. Nor the changeover after 1947, which its people described as change of Dogra Raj to Kashmiri Raj, satisfied them.

In mid fifteens, Kushak Bakula, the spiritual and political leader of the region, warned that "the nostalgic longing for a union with their spiritual home, Tibet, still exists. After Chinese occupation of Tibet, the loyalty of its people shifted to India. But they continued their struggle for recognition of their identity and some degree of self-rule.

Kushak Bakula was willing to reconcile to his region remaining a part of the state provided it was recognized as its federating, unit. Speaking in the Constituent Assembly of the state, he said, "the region would bear the same relations to the state as the state does to India."

This was, in fact, promised by Nehru and Abdullah at a joint press conference in July 1952. They had said that when the constitution of the state would be framed, it would provide for regional autonomy. The commitment was reiterated by the Kashmir leader a number of times, even after ressuming power in 1975, under an accord with Indira Gandhi.

As these commitment were not honoured, the Buddhist leaders raised the demand for separation of the region from the state and for a Union Territory status within India. It was not supported by the Muslims of Kargil, though they were equally dissatisfied with their somewhat subordinate status within the state.

Eventually, Narsimha Rao, as the Prime Minister of India, conceded autonomy to Leh district. I asked him "when Ladakh as a whole demanded regional autonomy you did not concede it but why you conceded it for Buddhists of Ladakh alone which would divide it on religious lines." He insisted that it was for the whole of the region. With his permission, I phoned Padamanabhia, who was Home Secretary as well as secretary Kashmir affairs of the Union Government. He confirmed my interpretation of the government decision. I asked Narsmiha Rao would he like to clarify the point by speaking directly to Padamanabhia. He said that he had heard his comments but wondered how it happened. Evidently he confused Leh with Ladakh.

The autonomous council, which after some years was granted to Kargil also, complicated the matter further. For the councils were not given powers more than elected boards enjoy in the rest of the country. Moreover, the region as a whole did not get autonomy, as promised to it, and is administratively governed by Srinagar.

But the grant of regional councils created an emulative interest in Muslim majority district of Jammu. Their demand is being encouraged by most of the Kashmir centric parties. If granted, their experience would be no less litter than that on the two districts of Ladakh have. District autonomy granted to Leh and Kargil should be granted to all districts of the state as a part of the principle of democratic decentralization but if it was done at the cost of regional autonomy, the district would not get share in political power. and weakening of regional identities would weaken the greatest secularizing force in the state. It would automatically provoke and strengthen the movement for separate state status for Jammu, mostly comprising its Hindu majority areas.

Thus Buddhists of Leh are now demanding for Union Territory status, cut of from Muslims of Kargil. In the last election to the no called Autonomous Council for Leh, the Union Territory Front won 24 seats out of 25, conceding only one Muslim majority seat to the Congress.

In the recent election, the Congress did not oppose the popular Buddhist sentiment while the BJP espoused the cause of Union Territory Front, just as in Jammu it played second fiddle to the BJP. The Congress leader and minister in Omar's government from the region, Nawang Rigzin Jora, conceded "the Union Territory status is not only the demand of certain organizations but of each and every individual of the region." "The Autonomous Council in which Union Territory Front had overwhelming majority," he added "has failed to achieve its objective." He hinted that without being in power and without making it a part of overall demand of the autonomy for the state, the demand of Leh could not be conceded.

In Jammu also, the only factor that helped the Congress to get more seats than the BJP in the election to the state assembly was that the BJP could neither come to power nor any Kashmir based party would share power with it. Without attending to the basic urges of the people and allowing them to drift in divergent directions would have dangerous implications for the state.

In short, such drift should be checked by firstly moving for a constitutional amendment which grants an equal regional status to Ladakh like other two regions. And to ensure unity of the state and secular character of the region, long promised regional autonomy be implemented. As a massure of satisfying the urge for empowerment of the people, at all levels districts of the state should be given the status that Leh and Kargil have enjoyed with further devolution of power upto panchayat levels