Hemis, Jammu and Kashmir (India) --  Dancers draped in silk moved to the beat of drums, evil spirits were warded off and over 60,000 plastic water bottles were collected as the annual three-day Hemis festival began. 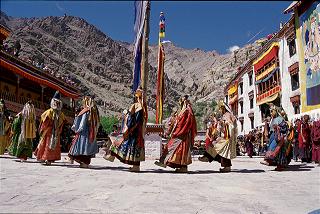 The slopes of the mighty Choeling mountain, 43 km south of Leh, the capital of Ladakh, came alive with the traditional colours of Buddhism. This time with a green mission.

The seat of the 800-year-old Tibetan Drukpa sect, the dominant faith in Ladakh, the monastery is located at an altitude of nearly 12,000 feet overlooking the Indus river. Wherever you turn, you see peaks sprinkled with late summer snow.

The carnival which began with a two-hour incantation to Lord Buddha and his incarnations drew more than 10,000 visitors from across the world.

The Hemis festival, one of the oldest religious carnivals of Ladakh, also marked the end of a 43-day spiritual march by the head of the Drukpa sect and 600 monks and nuns.

They trekked around 400 km over five high-altitude Himalayan passes in Himachal Pradesh and Ladakh, visiting remote villages to spread awareness about the environment, the hazards posed by non-biodegradable waste, treatment of kerosene burns which is the most common domestic disaster in the Himalayan villages and the importance of sustainable livelihoods and education.

“The festival this year is more significant because it is associated with a humanitarian cause - the spiritual march. I have realised that the poor Himalayan people need a lot more support in terms of education and healthcare,” Gyalwang Drukpa, head of the Drukpa sect, told the media and guests at a crowded interface.

“We raised funds from participants of the yatra (march), part of which will go for the education of the local children and young monks; and the rest of it for healthcare in the area. The inaccessibility of the terrain makes it difficult for the government and spiritual organisations to take aid to them.”

The marchers collected 60,000 plastic water bottles and packets along the way.

The high point of the first day of the festival were the masked Buddhist dances of Ladakh.

The dancers, clad in elaborate flowing silk headgear, brass face masks, traditional robes of heavy silks and jewellery of semi precious stones, welcomed the Buddhist seer and the marchers to the beat of local drums and traditional long horns.

“The biggest attractions of the Hemis festival are the traditional performing arts of Ladakh and the colourful monastery culture that date back to thousands of years,” 49-year-old Semzang Soo, a Malaysian Buddhist, who was part of the spiritual trek, told IANS.

Soo said the dance to look forward to at the festival (which will be held on the second day) is the black hat dance, where 13 monks in tantrik dresses will ward away evil spirits and obstacles by invoking the local incarnation of Buddha, the Guru Padmasambhava.