Ladakh, Jammu and Kashmir (India) -- Lamayuru Monastery in Ladakh, which is believed to be the oldest in the region, provides an insight into Buddhist culture through its ancient paintings and murals. 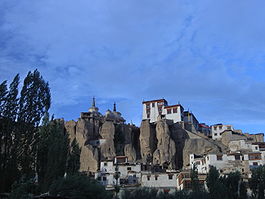 Founded in the 11th century, the monastery is a major attraction for visitors and Buddhist scholars.

It belongs to the Red-Hat sect of Buddhism and houses around 150 Buddhist monks.

The monastery is a complex of buildings with shrines dedicated to different gods and incarnations of Lord Buddha. It has a magnificent collection of wall paintings.

The monastery was rebuilt after invaders destroyed it. It also houses a cave, where an 11th century Indian Buddhist scholar meditated for years.

"There was a temple here which was demolished by dogras when they invaded the region. The monastery has a cave where Lama Naropa meditated," said Norboo Martse, a scholar.

According to folklore, the place where the monastery is situated was covered with lake water; however, when Naropa meditated there he caused the water of the lake to recede, thereby paving way for the construction ofthe monastery.

Every year the monastery comes alive with festivities for two days during the annual festival of Yuru Kabgyat, when monks perform mask dance.

The festival takes place during the summer season on the 28th and 29th day of the second Tibetan month.